How religion fails you

We are born with legitimate needs that God wants to meet. The problem arises when men who claim to represent God use religion to meet those needs illegitimately. How many people have seen these manipulations and declared, “If that’s God, then I want nothing to do with him”? They see the sham for …
By Seth Barnes
12 April 2010, 12:04 am
By Seth Barnes
12 April 2010, 12:04 am 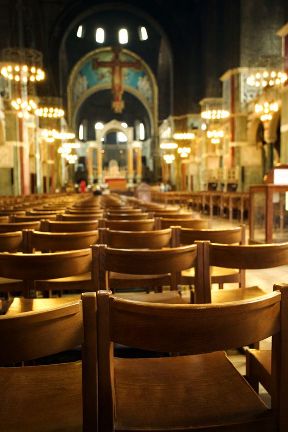 We are born with legitimate needs that God wants to meet. The problem arises when men who claim to represent God use religion to meet those needs illegitimately. How many people have seen these manipulations and declared, “If that’s God, then I want nothing to do with him”? They see the sham for what it is.
We would do well to join their argument, de-fanging it by saying, “You’re right, I want nothing to do with that God as well.”
Of course religion per se is a God-ordained thing – it formalizes and adds structure to our response to him. A good example of religion working well can be found in Acts 6 when the disciples choose seven deacons to take care of feeding the widows. An organized, corporate response to this most basic of human needs was exactly right.
At the same time, all five basic human needs Maslow defines can be twisted by religious people for their own ends. In developing countries, people’s need for food and water leads them to convert to whatever faith will feed them. That’s where we get the term “rice Christians” in Asia – missionaries cooking up pots of rice to attract the people to Jesus.
And the other needs we have can be twisted as well. Let’s look at the way religion often uses the other four needs in Maslow’s hierarchy: security, belonging, self-esteem and self-actualization.
Security. We have a legitimate need for security. When threatened, our reptilian brain switches to a “fight or flight” mode. Our comfort addiction is just the need for security left unchecked and running amok. It serves an important role in helping us survive in a harsh Hobbesian world.
Boundaries whether they be walls, homes, or rules protect us and keep us secure. We need them if we are to survive. But religious leaders since Jesus’ time have taken this need to extremes, making ever more narrow rules until legalism is the result. So our legitimate need for security is perverted, landing us in churches that control our behavior instead of setting us free.
Belonging. We are social beings made for community. We all want to be a part of a social structure that gives context and meaning to our lives. But too many churches take this need and create social clubs where attenders are invited to become members. Thus it is a common practice in many Baptist churches to play “Just As I AM” at the end of the service and call people to “transfer their letter” – that is, to move their church membership to that local body.
The problem arises when allegiance to the local body and the legitimate need to belong begins to overshadow the life of Lordship that Jesus requires. Churches develop elaborate protocols and social systems that subvert God’s original intent in his people meeting together.
Self-esteem. We want to feel good about ourselves. Jesus wants us to find our identity in him – it’s a righteous thing, freeing us to be who he originally made us to be. But religion often takes this legitimate need and asks us to find our identity in roles and positions. Thus our service as a group leader or deacon becomes a more important part of our identity than our relationship to Christ. It starts out innocently as we want to make a contribution to the bigger picture, but too often we begin to veer off course and begin defining ourselves according to the tasks we perform.
Self-actualization. The highest need we have is that of finding and fulfilling a call. What a great thing to lose yourself in God’s great purpose of bringing his kingdom to earth. But how many of us veer off in directions he never intended, following a missionary call he never gave us or going to a seminary he never asked us to go to, pursuing a means that doesn’t necessarily serve the ends.
That’s not to say that many missionaries or seminarians aren’t doing exactly what God intended for their lives. It’s just to say that religion often builds a career track for those of us who feel called to serve God in some way. And the career track becomes an end in itself, leading us away from, not toward his kingdom purpose for our lives.
Here’s the bottom line: As a human being you are hard-wired with these needs. They are going to drive you. You will always be motivated to satisfy them. But don’t look to men or the the religious systems they’ve created to satisfy those needs. They will fail you; you should never look to a man to define your call or relationship with God.
Learn to hear God’s voice for yourself and look to him to provide your needs. Yes, he’ll use men and women to do it, and yes, the religious systems they create are often a helpful tool. But recognize that they’re flawed and will create shortcuts that, while seeming to meet your needs, actually can lead you away from God.