How to become a human being

Buechner writes the following on the subject of what it means to become truly human. I derive great solace from his writings, particularly when I periodically am flummoxed and discombobulated by the tide of circumstances that carry me out to sea and am struggling to untangle who God meant me to …
By Seth Barnes
17 March 2007, 12:03 am
By Seth Barnes
17 March 2007, 12:03 am

Buechner writes the following on the subject of what it means to become truly human. I derive great solace from his writings, particularly when I periodically am flummoxed and discombobulated by the tide of circumstances that carry me out to sea and am struggling to untangle who God meant me to be. 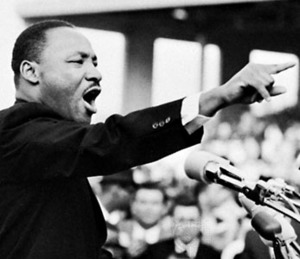 In 1963 I went on that famous March on Washington, and the clearest memory I have
of it is standing near the Lincoln Memorial hearing the song “We Shall
Overcome” sung by the quarter of a million or so people who were there. And while I listened, my eye fell on one very
old Negro man, with a face like shoe leather and a sleazy suit and an
expression that was more befuddled than anything else; and I wondered to my
self if, quite apart from the whole civil-rights question, that poor old bird
could ever conceivably overcome anything.

He was there to become a human being. Well, and so were the rest of us. And so are we all, no less befuddled than he
when you come right down to it. Poor old
bird, poor young birds, every one of us.
And deep in my heart I do believe we shall overcome some day, as he
will, by God’s grace, by helping the seed of the kingdom grow in ourselves and
in each other until finally in all of us it becomes a tree where the birds of
the air can come and make their nests in our branches. That is all that matters really.

This other war is the war not to conquer, but the war to
become whole and at peace inside our skins.
It is a war not of conquest, but of liberation, because the object of
this other war is to liberate that dimension of selfhood that involves the
capacity to forgive and to will the good not only of the self but of all other selves.

This other war is the war to become a human being. This is the goal that we are a really after
and that God is really after. This is
the goal that power, success, and security are only forlorn substitutes
for. This is the victory that not all
our human armory of self-confidence and wisdom and personality can win for
us—not simply to be treated as humans but to become at last truly human.