Saying goodbye to my dad was one of the hardest and best things I’ve ever done. It took a year. He was in horrible pain. He was losing everything that he held dear and he needed someone to witness the awful process and bless it. That person was me. Dying is not something we do well in Amer…
By Seth Barnes
12 January 2021, 12:01 am
By Seth Barnes
12 January 2021, 12:01 am 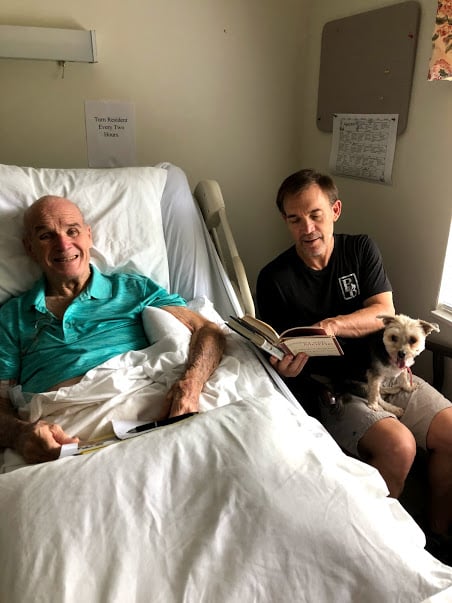 Saying goodbye to my dad was one of the hardest and best things I’ve ever done. It took a year. He was in horrible pain. He was losing everything that he held dear and he needed someone to witness the awful process and bless it. That person was me.

Dying is not something we do well in America. Partly it’s because we’ve not had any practice helping other people die. We let the professionals do it for us. And then when it’s your turn, it’s the first and only time you die. Maybe you felt like dying before, but when the doctor tells you that you’ve got just a few months left to live, you’re playing for keeps.

But in America, we especially do it badly. This is a country where Jane Fonda can be in her 80s and look better than most 50 year-olds. If the grim reaper is following us, we are shuffling along as fast as we can with our walkers to stay out of his reach.

When our parents get old, we expect them to move to Florida and eventually, into assisted living. If we happen to live in Muskegon, then we’ll get on a plane to see them when we can.

One of the hardest things about helping dad to die was passing by all the old people in wheelchairs with nothing to do and no one to talk to them in the nursing home halls. In one assisted living home, they would crowd around the door to the outside world and try to make a break for it when it opened. It was an outer ring of Dante’s Hell.

They put my dad at the end of the hall. My dad, the doctor, the colonel, the president of his class at Yale, hero to thousands whose lives he saved, was reduced to an afterthought in a storage facility for the dying.

He would yell out to the nurses from down there. I’d hear his shouts down the hall. Maybe he was following Dylan Thomas’ advice to “rage, rage against the dying of the light.” Or maybe it was just the pain of the bed sores that would eventually kill him.

He bounced from facility to facility. Hospital to rehab to assisted living to nursing home. In each place, he’d be greeted by vacant stares and a roommate who was in worse shape than he was. I was happy if I could get him a bed by a window.

My job had no training manual. When the doctor said, “If we don’t operate in a few weeks, he’ll die, but if we operate, it will just prolong his pain,” there was no standard procedure.

I’m one of four siblings and my brother and sisters counted on me to stand in for them. To love dad through this for the family. So, I learned the hard way. For those of you who have this assignment in your future, here are five lessons I gleaned from the experience.

Dad’s life had been filled with adventure. But now it was filled with the banality of meds and protocols. Going to the bathroom was a project. At some point, he lost the capacity to even read books. Often, when I’d show up, it would be the highlight of his day. I needed to show up.

The thought of dad sitting there alone, trapped in his wheelchair or bed, haunted me. All my life he’d not really needed me – I didn’t want to fail him now that he did.

The food was bad, so I brought ice cream.  I would stop by the dollar store to pick up a bunch of puzzles and novelties. Hot cookies or ice cream were a welcome treat. The thing he liked the most was toothpicks. It didn’t need to cost much, but it showed that in my own small way, I was fighting for him.

One of the best things I could do was to read books to him. He loved “Tuesday’s with Morrie.”

While many of the nurses were overworked, most cared a lot about their patients and wanted to help. At the Oaks Rehab Center, they’d periodically wheel dad into a room with five professionals, all from different disciplines. Each would take ten minutes to recommend action. I appreciated their team approach.

And I needed to find others to care as well. Without family members helping out, it would have felt impossible. My sister, Liz, and my wife, Karen, were true partners who did so much. My daughter Emily spent a week caring for him so I could travel.

I often reached out to dad’s old friends, getting them on the phone. Those phone calls to say goodbye when the end was near were a gift to him.

My dad was never an affectionate guy. When he’d greet me as an adult, he would  sometimes shake my hand instead of hugging me. But in the sterile world of hospital beds, he needed touch. Along the way, I learned to hold his hand. I learned to do brave things that I’d never do growing up.

My role with dad actually reversed along the way. He would follow my lead. It became natural to do things that would have been awkward earlier in our relationship.

I’m glad that we were able to talk to God about the stuff that really mattered.

One of the things I did to help process all we were both going through was to take up poetry. Here’s part of a poem I wrote about it.

I didn’t want to make this trade.

But who else would help you?

The provider waits for me to

Bring a spoon to his mouth.

As your small son, I lay in diapers,

Flat on my back, waiting for you.

Now that is your day.

I live between the

From events long past,

Years before I was born

That we now navigate together.

It was a relief when his pain ended. As a family we had a last communion together. We wept. We hugged. We waited for what would come next.

One day my family members will probably get to help ease my transition out of this world and into the next. It’s a tough assignment, but I’ll be so thankful to have them helping me on my way.

Who in your life needs your help in making the transition from this world to the next? What is your plan for helping them?

Want more on the subject? Here’s a book on palliative care that is good.

The Ragman by Walter Wangerin

I love this story. If you love the vulnerable gospel, I think you’ll love it too. My friend Jack …