How to start a church explosion 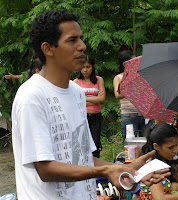 How did they do it?

Details for those who have a couple of minutes:

A
few days ago, Geovanny and I were talking “shop” about various aspects
of the Lord’s work going on here in Guayaquil. In the middle of the
conversation, he said, “have I told you yet that we are no longer a single church meeting at “11 and Huancavilca”, but are now a network of six house churches?”

Seeing my obvious interest, he proceeded to share what had taken place over the past few months…

“In
April 2008 there were 29 of us meeting together in our church. We
decided to ask God for 70 new believers by year’s end. From April to
August we did nothing but pray. Some weeks we would fast and pray,
other times we stayed up all night praying…but prayer was our focus,
praying the Lord of the Harvest for laborers and praying for the “70”.
We prayed individually and collectively for four months.

Sometime
around mid-August we started praying less, but began implementing an
evangelistic emphasis every month. At first we thought a single monthly
effort would not be enough. But because of the spiritual preparation
make by the previous months of concentrated prayer, we were amazed at
the response these evangelistic efforts were bearing in spiritual fruit.

By year’s end (2008) we had surpassed our prayed for goal of 70, and were busy discipling 110 new believers
–the fruit given to us by the Lord from these monthly evangelistic
efforts. In Feb-Mar of this year, these new disciples began meeting in
five homes closer to where they lived. Nelson is now leading the “Villa España” church, José the “Sucre y 14” group, Marcos and Tania the “Balerio” church, Juán the “Febres Cordero y 14” group, and William the “35 y El Oro” house church.