We encourage our racers to blog about their lives on the World Race. We encourage them to be as vulnerable as possible. It gets them to a place of freedom and it shows readers who share their experience that they’re not alone. It can be a great stimulus to healing and developing community. Eve…
By Seth Barnes
10 September 2012, 12:09 am
By Seth Barnes
10 September 2012, 12:09 am 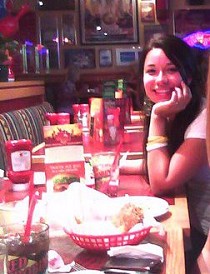 We encourage our racers to blog about their lives on the World Race. We encourage them to be as vulnerable as possible. It gets them to a place of freedom and it shows readers who share their experience that they’re not alone. It can be a great stimulus to healing and developing community.

Every now and then, I’ll read a blog that is so courageous it that it blows me away.

Amie Gallegos’ blog did that too me. We know and love the Gallegos family because Estie connected with their son Craig, who tragically died several years ago.

What Amie shares is so raw, it’s shocking. You want to turn away from it. But it also contains the seeds of connection.

I believe young people like Amie are dying for connection and are willing to take great risks to get it. I bless Amie for the gift that she gives us all as she shares the following:

Here is it the unrated truth of Amie Galllegos past
1. My parents divorced when I was 2
2. I was molested when I was 5
3.I think I was raped Round this time as well but the truth has not been revealed fully
4.I have struggled with sexual lust since I was five yrs. old  from that I have
felt my purity was stolen and could not be given back
5. After being molested I began to repeat what had happened to me to others
6.I didn’t get to see dad everyday, so I felt entitled to his wallet – he owed me .
7. My dad remarried when I was 6 to an amazing woman, Kelly .
8. In sixth grade my teacher was verbally inappropriate with me but was told To be quiet and that I was dramatic a couple years later he got arrested for child pornography .
9.My grandpa tried touching me in appropriately and was also told to keep quiet and not tell anyone
10. That is how I have lived a lot of my life being quiet about things that have happened to me God has called me out of fear but to no longer be silent. to let it out let it all out.
11.I used to get angry and frustrated When people didnt listen to me
12. I struggled with watching pornography when I was 12 to 18
13.i was in really severe car accident when I was in 7th  grade
14.7th grade almost died of bleeding to death first period never forgotten I apologize boys something u probably don’t want to read about
15. I lost my virginity when I was 15 I was high and drunk and don’t remember most of it
16.After that I felt sex had no meaning since I was no longer a virgin
17.I did not value sex from the time  i was 15 to 18
18.in high school I slept with two guys I the same night and have not allowed God to restore me from the embarrassment I feel about this and still have shame I totally don’t want to post this but God is telling me it will set me free !
19. I used to constantly crav lustful attention from men and often would find my value by who or how many men  like me ( sometimes I still battle this desire )
20.  I don’t trust most  men or their intentions with me
21.I don’t like telling people about my past because I am not proud of the things I did and who I was
22. I used to be very spoiled and super unappreciative … I am still spoiled but have been given a thankful heart!
23.I used to live life as if all revolved around me
24.I used to be selfish
25.my brother Craig passed away four years ago I struggle with really dealing with this and compare my life to the life he lived and the I impact he made fear that I won’t make as big  of an impact as he did ( still a battle and fear )
26. I used to fear being forgotten
27.I used to always desire to be in control ( a current battle but getting more and more comfortable of letting go of the wheel )
28. I used to struggle with identity crisis and being content with being known as His beloVed daughter
29. I have trouble fully forgiving others but expect to be forgiven as soon as I apologize
30. I don’t forget what is behind and often find myself living I the past instead of there sent afraid to let go
31. I am self-righteous at times
32. My pride is cancer in my bones
33.I lash out when someone offends me
34.I make excuses and try to justify my actions when they are not the characteristics of God
35. I often try to earn my salvation
36. I am stubborn
37. Sometimes I try to pull the sliver out of someone else’s eye with a plank stuck in mine
38. I have not gotten over myself yet and do not consider my brother better than myself yet God is working on me
39.I am impatient and struggle trusting God will my life
40. I am a hypocrite and often can tell people where they fall short, but struggle admitting and exposing where I fall short
41.I try to fix things and love people out of my own effort
42. I love feeling God’s joy but when things are rough and brought through suffering i question if he loves me and begin to think I’m doing something wrong
43.I over-analyze everything
44. I am afraid of looking ugly
45. I am lazy
46. I am sick and in need of  a healer
47. I get stressed easily and focus on the task at hand or circumstance instead of allowing God’s peace to captivate me another trust issue
48. I struggle with gluttony and also with trying to fast out of guilt instead of drawing closer to God.
49. Right  now there is more me in me than Jesus in me.  my desire and hope is that this changes each day I am on this earth .
What is the point or motivation of me sharing all these ugly things about myself with you? My motivation is from God so that he can set me free, but also that this will give u courage to empty out the skeletons in your closet as well to get rid of the fear and the lies the enemy is telling you that you need to keep this silent and hide it away that instead that keeps you captivated and in chains ..That letting it out is the only way to be free that we shall hide no longer but boast about our weaknesses so that God can show His mighty power in the way that he changes us and makes us new that he truly does have this power and uses it .

I am not that girl anymore the girl who treats sex and lust casually that does not mean that I don’t struggle or battle these things daily just like Paul’s thorn in his side God has also given me thorns in mine but the beauty is he continually takes one out daily and does not let the pain become unbearable because he is right there holding my hand showering me with His grace and love ..

Today as I sit in his presence he gave me this vision that sometimes. Allow myself to believe that I am too dirty to be cleansed by him and instead of running to him I hide from him but today he reminded me that no matter how much mud I have allowed myself to be covered by, he has the power to clean it off.
Even if it takes a power washer to get the dirt off yes – it may sting, but it will heal and in the end I will be cleansed.

As God has been preparing me for the world race the less I have taken showers and been cleansed physically but he is cleaning the inside of me first then the outside will shine out of a result of me being cleanses on the inside.