I’m not sitting down when my family’s attacked

It’s a few minutes past midnight at our home. A low, but shrill scream broke through the stillness from the room above me. It was our youngest child, experiencing a grand mal seizure. She’d forgotten her medicine before going to bed. I flew up the stairs in an instant, flung open the door. She w…
By Seth Barnes
02 April 2008, 12:04 am
By Seth Barnes
02 April 2008, 12:04 am

It’s a few minutes past midnight at our home. A low, but shrill scream broke through the stillness from the room above me. It was our youngest child, experiencing a grand mal seizure. She’d forgotten her medicine before going to bed.

I flew up the stairs in an instant, flung open the door. She was laying on her bed in the throes of convulsions.

It was the icing on the cake for me – an April Fools Day where seemingly random pain leeched into the lives of those I love. As her body shook, Karen and I prayed over her. I don’t know how you deal with randomness and pain in your life. Personally, I view this as just one more attempt to steal and destroy that which God has claimed as his own. I’m not going to allow my family to be picked apart in this way. I don’t understand it, folks. Yes, a part of me feels helpless confronting something so beyond my control. But I choose to not respond as a victim. I see myself in Christ as “more than a conqueror” and this is a very practical test of the reality of that view.

Elsewhere as I write, staff members Don and Connie Rock are trying to get to Detroit, where his sister has slipped into a coma and is not expected to make it, her kidneys and liver having shut down. Don and Connie were either going to drive through the night or get on a 7 a.m. plane. More randomness and pain. Another opportunity to put our faith to the test.

And at various point during the day, I had the opportunity to pray with people and to wage war against the enemy of our souls, to, as the Bible advocates, resist him. The natural man would say I’m over-spiritualizing things, that bad things happen to everybody – that it’s best explained by an existential perspective.

But folks, I’m not a natural man. I’m a spiritual being having a temporary human experience. I believe that, like many of you, I’m God’s agent, his tool of restoration and reconciliation on this dark planet. We’re at odds with the existing order, citizens of another kingdom by identity, warriors by vocation. We’ve been dumbed down and domesticated by too many of our churches. Religion has made us nice. We need to re-discover our spiritual vocation. 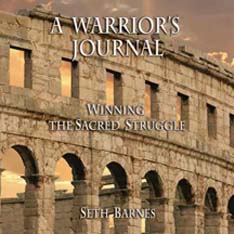 The paradox of our spiritual battle is heightened because the Bible is full of the bloody accounts of physical battle. Wherever His Kingdom is advancing, God’s people have been willing to lay down their lives as they engage the enemy. It’s simply the price of capturing new territory. He asks us to do the same, though perhaps in a different sense: “For whoever wants to save his life will lose it, but whoever loses his life for me and for the gospel will save it” (Mark 8:35).

But while we are called to fight, we do not fight as others do. Take for example the Islamic jihad warriors. Their battle is a physical one. They fight to the death, while our fight brings life. They wield swords, while we turn the other cheek to our physical enemies, waging battle against spiritual principalities and powers of darkness that hold our physical foes enslaved. We desire not to strike against our enemies with violence, but to free them with love. To outsiders, it is a perplexing way to fight, but such was Jesus’ revolution.

In this study, we’ll look at examples of the Lord’s people taking territory back from the enemy.

Because the battle for which Jesus outfits us is a spiritual one, the parallels with David and his mighty men may seem to be a stretch. After all, his battle was physical. David fought for his life with actual weapons, whereas the sword and shield that Ephesians 6 describes are metaphorical.

However, we can glean many principles that help us better understand our role as warriors and the Lord’s strategy for us. God didn’t include these passages simply in order that we might have a better sense of Israel’s history. He wants us to learn life lessons.

Saul had botched things up pretty badly. His compromises had led to the defeat of Israel, his own death and the death of his sons. His army was so thoroughly routed that the Israelites abandoned their towns and fled (1 Chr 10:7)

When they regrouped at Hebron, David was the obvious choice to lead them. He had been their general; now he would be their king. His first step was to quickly capture Jerusalem from the Jebusites. His next step was to rebuild it and to prepare his army to take on the Philistines again.

While as followers of Jesus, our battle is in spiritual realms, David’s battles were physically gory affairs. Nevertheless, David set the biblical standard for courage and for trusting the Lord for both the large-scale struggle and each individual battle’s strategy. Israel’s leaders eagerly followed him. We’ve got much to learn from him, too.

next entry to Warrior’s Journal here