I wrote this reflection just before leaving Africa: As the sun slides behind the green hills of Manzini and dissolves into an orange glow, Karen and I are reflecting on the morning’s ministry with our World Racers. We have 75 of them now, all spending a year trying to figure out how to live a…
By Seth Barnes
25 June 2007, 12:06 am
By Seth Barnes
25 June 2007, 12:06 am 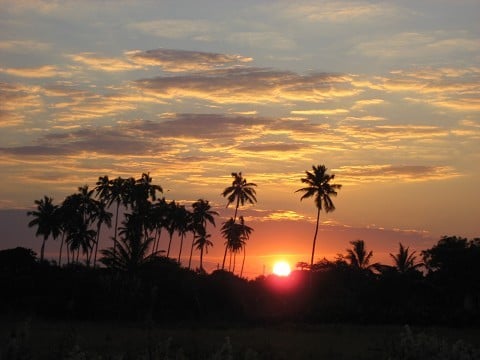 I wrote this reflection just before leaving Africa:

As the sun slides behind the green hills of Manzini and dissolves into an orange glow, Karen and I are reflecting on the morning’s ministry with our World Racers.

We have 75 of them now, all spending a year trying to figure out how to live a radical life here on planet earth. I spoke to them about this process and I spoke to them about coming alive. I gave them a few examples of people I’ve known who have chased their dream. And then, at the end, my friend and mentor, Andrew Shearman, stood up and with tears in his eyes, did what needed to be done.

I’ve got no sense for such things. Apparently my message had connected with a few hearts. Andrew sensed that some kind of spiritual transaction needed to occur and said that if anyone wanted me to impart something from my life to them, they should come forward and get it from me.

At this point, we wade into spiritually murky waters. The Bible says a few things about it, but frankly, growing up in a good evangelical church, I never saw an example of imparting spiritual gifts and didn’t have a frame of reference till later in life.

Paul enjoins Timothy, “I remind you to fan into flames the gift of God, which is in you through the laying on of hands.” (2 Timothy 1:6) We see other examples of this as when Paul prays for some disciples at Ephesus, laying hands on them and seeing the Holy Spirit give them spiritual gifts on the spot. (Acts 19:6)

So, while not quite a sacrament, this business of imparting spiritual stuff by laying hands on people and praying for them was standard operating procedure for the early Christians. I was always taught to dismiss that kind of thing by labeling it as “charismatic.” What I now see is that Jesus-followers need help in growing and that physical actions sometimes trigger spiritual responses. We’ve made spiritual growth too much of an intellectual exercise, a head-game.

More of us need what someone else has got and need to be bolder in going after it. The line that formed for prayer this morning was long and filled with young people hungry for more of God. I don’t know what they received, but I know that God delights in hungry people.

If you’re hungry for God, do something tangible to show him. Ask someone you respect to lay hands on you and stir up the gifts in you that have lain dormant for too long.