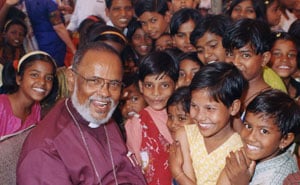 In India, 70% of the orphans in a Hopegivers orphanage end up going to Bible School. And when they graduate, they take a martyr’s oath. Hopegivers founder, M.A. Thomas, has a goal to raise up a million orphan army. This past month, he graduated 10,000 from his Bible Schools – I’d say he’s well on his way.

All this success stirs up opposition from those who have a stake in the status quo. Recently his enemies burned Thomas in effigy. This morning I got an email from India saying that the militant Hindus had put a $30,000 bounty on his head. So, there is a good chance that this amazing man of God will soon be martyred. And he’s ready – his response is to ask for prayer that he be found “faithful unto death.”

Meanwhile, back in America, the closest we get to martyrdom is that we’re being entertained to death – our crisis de jour may be that we can’t get the Tivo to work. The contrast is stark. We’re distracted and comfortable here. Mention martyrdom to a Christian parent, and they’ll start talking to you about safety procedures and legal implications.

Something is wrong with the picture, and it’s not the Tivo. We follow a radical Jesus, but we’ve lost the plot. Jesus said things like, “Whoever tries to keep his life will lose it, and whoever loses his life will preserve it.” (Luke 17:32). Think about it.

Preserving our lives is exactly what many of us our trying to do. It’s time to look at the example of men like M.A. Thomas and wake up.