In America, everything seems to have a half-life of a McDonald’s hamburger.  Marriages are swallowed alive by the pace and pressure of modern life.  Today’s beloved Christmas toy is tomorrow’s landfill.  TV’s herky-jerky treatment of even the most serious subjects renders us numb (…
By Seth Barnes
10 July 2009, 12:07 am
By Seth Barnes
10 July 2009, 12:07 am 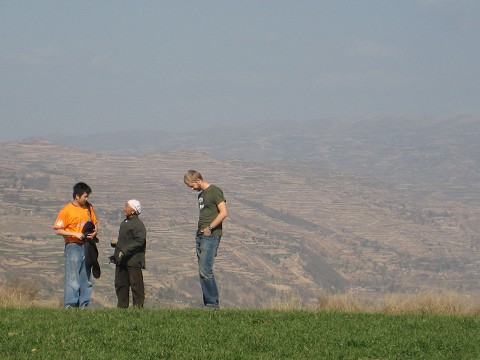 In America, everything seems to have a half-life of a McDonald’s hamburger.  Marriages are swallowed alive by the pace and pressure of modern life.  Today’s beloved Christmas toy is tomorrow’s landfill.  TV’s herky-jerky treatment of even the most serious subjects renders us numb (“God and existential neurosis, what can be known?  More in a moment…Having trouble with irregularity?  Occasional discomfort is normal…”)

Thus it is when we bump up against someone or something which doesn’t reek of superficiality, we’re jolted into a state of wakefulness which produces questions such as:  “Just how much of this cultural Christianity has rubbed off on me?”

I experienced such a jolt the other day.  I found myself in a south Texas backwater called San Juan.  As I sat in the living room of Clara Jarvis, the widow of Fred Jarvis, I found myself entering the world of another generation of missionaries.  Fred Jarvis started a mission called New Life League.

As I listened to Clara explain how he started it, I began to see Mr. Jarvis as representative of a generation of people possessed by an unrelenting passion for the lost.  Here was a man who had forsaken all so that he might identify himself with the millions around the world headed for a Christless hell.

His passion lives on in the tracts that his mission continues to print.  He asks us, “Do you know Jesus Christ as the Lord of the harvest?  Once you have a meeting with Him you will never be the same.  Each morning you will awaken and ask, ‘What can I do today to help meet the needs of a dying world?’ Have you seen a perishing world with His eyes of compassion?  And have you wept over lost souls with His heart of love?  What are you doing to reap a spiritual harvest of precious souls in all the world?”

Fred Jarvis’ approach to missions recruitment had all the subtlety of a head-on collision.  Clara told me how it didn’t matter to him what age you were.  He’d button-hole the 74-year-old retiree and the high school student alike with the question, “Have you ever considered answering God’s call to the mission field?”

This bluntness challenges my modern sensibilities.  There is this voice in my head which says, “Yeah, but had he really earned the right to confront people like that?”  Perhaps behind that voice is an unspoken question, “Is missions really mandatory for everyone?  I mean, how does this fit with the balanced Christian life?”

On the other hand, thanks to Fred Jarvis, I’m troubled by the thought that maybe this balanced Christian life stuff is all a bunch of bunk.  Look at the many instances in which we see Jesus throwing people off balance.

He seemed to want only those followers who were able to stay permanently uncomfortable.  His was not a call to comfort, it was a call to gonzo off-kilter radicalism.  When comfortable people came to Jesus with the plaintive question, “Can I be comfortable and know God?”  Jesus answered, “No way, baby.”

I see a lot of young Christians today who don’t even bother with the question of compatibility between God and a comfortable lifestyle.  Growing up in a culture that places a premium on comfort, they just assume that the answer is “yes.”  Having never asked God the question, they graduate to adulthood embracing the premise that it’s OK to embark on a career which is founded on the incentive to become more comfortable.

Fred Jarvis would say they’re leaning ladders up against the wrong building.  In an article entitled Crime of the Century, he jabs a rhetorical finger against the sternum of a generation of Nintendo addicts:

Resist the charge if you will.  Get mad if you must.  It is better to have some emotion than none.  You will be conscience-stricken in heaven, if you aren’t soul-stricken now.”

Jarvis had an agenda that he was committed to advance no matter the cost.

True confession time:  I’m neck deep in missions, and I find that his words make me sweat.  Perhaps I respond to guilt-based pleas more than most, and perhaps this is one.  But is guilt all bad?  I’m haunted by the hungry faces of children growing up without Christ.

Several years ago, I led a project in Mexico.  The biggest guy on our team was a fellow named Mike.  Mike had a heart to match his pumped-up body.  On the last evening of our project, just as the sun was setting, a couple of Mexican kids came walking into our camp.  Mike and others had touched them with the love of Christ during their vacation Bible school.  So they walked five miles just to see Mike one last time.

I had the privilege of translating for Mike as he asked them if they knew Jesus as Savior.  Jose admitted that he didn’t.  Mike asked Jose if he would like to accept Jesus into his heart.  Jose seemed very eager to do so, despite all the distractions around.  So, Mike led little Jose in a prayer of salvation.

Later, as he began to describe for the group how Jose had walked five miles just to say goodbye, and that in doing so, Jose find Christ, Mike was overcome with emotion.

He couldn’t get the words out.  Mike has probably never heard of Fred Jarvis, but he has felt the same passion that so stirred Jarvis’ soul.  Jarvis understood the precariousness of man’s position; he understood that we hang by a thread over eternity’s abyss.  The notion that in our country comparatively large numbers would have such clear access to the truth made Jarvis a blunt man:

“When America, which has one minister for every 514 people and churches with billions of dollars already invested in brick and mortar, plush pews, expensive organs, lavish stained glass windows, is still foolish enough to spend more than a million dollars a day to construct still more and fancier churches, do you wonder why we think it is not fair?

When you can turn on your radio on Sunday and find nine or ten religious programs all competing with one another, and yet realize that the unlimited opportunities on the mission field go unexploited, and that some of the programs that already exist are forced to retrench for want of funds, do you wonder why we boil?”

Back at home, I’m sucked back into the easy lifestyle which Jarvis railed against.  I haven’t seen my wife for almost two weeks.  We go out for a rare treat:  a movie and a nice restaurant.  I’m splurging, it’s true, but the total bill after tax, tip, and baby-sitter is $80.

I know a family of thirteen in Mexico whose mother makes $3 a day.  Their newborn son is sickly.  The garbage around their home attracts flies that buzz around the baby.  What is my obligation to this family?  Is “balance” realistic?

At least it’s a struggle.  If my world is constantly shifting underneath me it is because I’ve got one foot firmly planted in suburbia and the other in the Third World.

But what about a generation of young people weaned on Diet Pepsi and Star Wars?  Many are expected to pick up the shards of their own shattered families.  To many of them, Jarvis’ appeal may sound like the hiccup of an old broken record.  How do we really expect them to respond to Jarvis when he says:

“The logic is inexorable.  The guilt is clear and is piling up indictments against us.  This selfish withholding of Christ from the nations is nothing less than the grossest form of cruelty and wrong.

You still have time to join us in reading and weeping, praying and repenting if you want to – but to ask for revival and blessing without repenting of this monstrous sin is an insult.  There is a time when the Bible says that even our prayers are an abomination.”

Yet the Joses of the world continue to walk five miles and more.

Jesus said, “The fields are white unto harvest.  Pray therefore to the the Lord of the Harvest that He would send out laborers into the Harvest.”  Fred Jarvis saw the Harvest so clearly.  The terrible urgency of the matter cut him to the bone.  You can almost see his tears when he writes:

“God give us men – brave men, heroic men, self-sacrificing men with a new sense of their solemn and neglected task, who will shove everything aside and run to the rescue.

If we can’t go in person, we can prevail in prayer or provide financial support.  Let us lay down our treasures on earth that we may lay up treasures in heaven.  Don’t ask, ‘What can I do?’  Rather, determine, ‘This will I do!’  Then do it now!”

Some of us who are more rooted in a social gospel or who are perhaps simply encumbered by a bunch of barely committed kids in our group will find Jarvis’ urgent call to be quaint or anachronistic.

Others like myself will be stirred to ask the question, “OK, how do we sell today’s youth on this urgency?”  The only adequate answer I’ve found is that we can’t.

If we truly believe that missions is mandatory, then the most we can do is to give them a missions experience and give the Holy Spirit the opportunity to bring a little Jose into their life.  When your students’ hearts are broken as was Mike’s, then perhaps they’ll begin to catch a glimmer of Fred Jarvis’ passion.