Learning to cast out demons

My son Seth, having graduated from college, is in the Philippines on the World Race. We raised him to believe the Bible and try to do the things that Jesus did. Now he is getting the chance. I taught him, for example, that demons are real and that he has authority over them. But now he gets t…
By Seth Barnes
24 November 2007, 12:11 am
By Seth Barnes
24 November 2007, 12:11 am

My son Seth, having graduated from college, is in the Philippines on the World Race. We raised him to believe the Bible and try to do the things that Jesus did. Now he is getting the chance. I taught him, for example, that demons are real and that he has authority over them. But now he gets to apply it.

There really is no other way to become a mature follower of Jesus than to follow this process. Raising a child with no practical application of the principles you teach is a recipe for failure. His recent blog illustrates how hard it can be to make the jump from abstract principles to application:

I’ve been quite sheepish lately, I’m ashamed to say. Here is an email I
wrote to a couple of people last night about my recent experience on a
cruise vessel:

An interesting thing happened on the boat today (Aaron
said he’d blog about it). A lady was possessed by a demon and screamed
“In the name of Jesus Christ” incessantly. We were all very nervous,
unsure, and anxious to help. 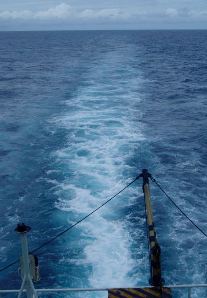 About eight of us gathered at one point
around the room she was in to pray. I prayed
for courage for myself to go in there and cast the demon out because I
knew that praying him out wouldn’t change anything. I’ve seen that too
many times. She stopped and started twice.

The third time I was
the only one around and I tried entering the room to cast that damnable
creature back to hell. I entered and saw the possessed lady scream.

She
screamed louder and stood from her chair, knocking over another lady
that was trying to silence her. I stepped forward and a strange surge
ran thru my body that gave me strength.

I put my hand out to her, and a
man stepped in front of me as the lady looked at me and screamed. He
said nobody should be in the room and that she would soon be quiet.

I
became much more timid and made a feeble attempt at speaking the devil
out of her before exiting the room. I am very upset with myself after
each time I allow Satan to have control.

The same thing happened
with someone else I knew, I’ll call her Rachel, just before I came on
the race. I knew what to do. I knew that Rachel didn’t need more prayer
over her. She needed someone to speak to the demon taking control over
her with the power of Jesus.

But I didn’t. I prayed because it was
something I’d done before. I’m familiar with praying. I’m comfortable
with it. But when it comes to casting out a demon, which is much more
exciting, I’d rather not. I do think I’m taking steps in the right
direction, but each foot shakes meagerly forward.