Tom Davis is 39 years old today. He’s become one of my covenant brothers and is a gift to so many. Here’s from his blog:   Today we went to a village called Ngariam. Ngariam is made up of people who have been traumatized by a nomadic tribe of people called the Karamajong. The Karamajong…
By Seth Barnes
22 September 2009, 12:09 am
By Seth Barnes
22 September 2009, 12:09 am 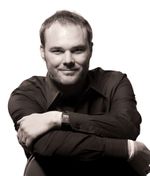 Tom Davis is 39 years old today. He’s become one of my covenant brothers and is a gift to so many. Here’s from his blog:
Today
we went to a village called Ngariam. Ngariam is made up of people who
have been traumatized by a nomadic tribe of people called the
Karamajong. The Karamajong over the past 50 years have burned their
huts and fields, raped their women, abducted some of their children,
stolen their cattle and killed anyone who got in their way. To add to
that, this area is in the middle of a food crisis.
These children showed visible signs of
malnutrition – yellow eyes, discolored skin and hair, distended
bellies. They were literally in dirty rags and they were a kind of
dirty you have likely never seen. There was absolutely no sign of
hygiene. They had open sores on their bodies that were oozing with
infection. They had to walk FAR to find water (although they had a
water pump nearby that had been broken for months…we were able to give
them $80 to fix the part so that the 5,000 people in the camp could
have water again – $80!!). To say that sponsorship makes a difference
is a gross understatement.

Children were shaking our hands while
kneeling on the ground. It felt so strange to have someone literally
bowing to me. These people are
in DIRE circumstances and situations. The fact that there were children
running around with gaping wounds in their head with no means to care
for it just devastated me. I pictured my little girls running around in
pain and with festering sores and infection while I stood by helpless
to do anything. I cannot imagine that being the norm like it is in
Ngariam. 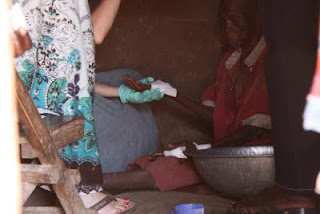 So, as I was taking all of this in, one of our team
leaders asked my friend Sarah and I if we would be willing to go help
an older woman they encountered. Of course we went. I had no idea what
we were walking into. This woman’s name was Mary Ida and she was
elderly. We were told that as some of our team members had been walking
through the village they encountered this woman lying literally face
down in the dirt. They actually thought she was dead until they saw her
head move. There were other village women walking by her yelling at her
to pull her dress down because parts of her body were exposed. This
woman was not able to move and was receiving no compassion from the
people around her. Since the guys didn’t know if it would be
appropriate to help her they went and got Sarah and I.

As Sarah
and I approached her my heart just broke. There she was lying in the
dirt – literally a pile of skin and bones. Her bones were protruding
from her skin. Part of her toes were gone. She had gaping holes where
her toes met her foot. Her legs and hands were swollen. Her hands had
wounds and sores on them. She laid there blinking at us. Our travel
partner, Rita, asked the women around her what her story was.
Apparently she suffers from jiggers which are worms that make their way
into her feet. They have left her with infection which has made it
almost impossible for her to walk because of the pain. Her hands suffer
from something similar. Her husband is dead as all are all her
children. Her son’s widow tries to care for her as she can but has no
resources to give her what she really needs. She said Mary was
traumatized by all the loss in her life and the fact she is alone.

The
first thing we did was pray for her… we asked for God to be present
with her and to bring her comfort and peace. We then asked if we could
move her into her hut so we could care for her. Apparently her hut was
in disarray so they led us to another hut that literally had nothing in
it. It had a thatched roof and a dirt floor. Two women from the village
picked her up and carried her into the hut for us. We only had one pair
of gloves so Sarah said that she would be the one to actually tend to
her wounds. We only had a first aid kit with us so we laid Mary on the
floor while she groaned in pain. We had a bottle of water which we gave
her to drink. I’ve never seen someone gulp water down like that – she
was SO thirsty. We had a bowl with water to lift her feet into. Sarah
gently washed her feet which were bleeding and covered in flies…the
whole time Mary was crying out in pain. It was probably the most heart
wrenching thing I have ever been a part of in my life. Sarah kept
saying, “I know, Mary…I’m sorry it hurts…I’m just trying to help…God
help Mary”. After Sarah washed her feet we treated them with
anti-bacterial ointment and wrapped them in gauze to protect them as
best we could. It was just a bandaid on a much larger problem but it
was all we could do. We did the same for her hand which had open,
festering sores.

I
wanted to cry through the whole thing. I wanted to turn and run. But I
knew that Jesus would be right there where we were doing what we were
doing. He was using us to wash her feet, to hold her hand, to bandage
her wounds, to whisper words of comfort, to say her name, to pray for
her. I felt God’s presence in that little mud hut – it was palpable.

And you know what? When we finished Mary looked up at us and actually smiled then laughed. She laughed.
Here was this lady that literally could have been left for dead in the
dirt with the African sun beating down on her LAUGHING! The way that
she looked up at us when we were finished is something I will NEVER,
EVER forget. I think I saw Jesus looking back at me.

One of the
things I wanted most of all from this trip was to glimpse God in a new
way. I glimpsed Him today in Mary. We probably spent 30 minutes with
Mary today and they may have been some of the most important minutes of
my life. As badly as my heart hurt for Mary I know God’s heart hurt for
her so much more than mine. He felt her pain and loved her so much He
sent us to her on this day to love her, to touch her, to BE Jesus to
her.

I really can’t put words to what I feel in my heart right
now…it’s simply overwhelming – overwhelming that God allowed me to be a
part of Mary’s life today…overwhelming that there is such suffering in
the world while this would be unthinkable in America. But I’ll save
that as well as what I saw with the children in Ngariam for another
post. For now, I just want to be in this moment.