Make an extra effort to bridge the distance

Last week my old friend Damon Ghee made a special effort to see Karen and I after we’d not seen one another for a couple of years. He drove seven hours to spend a little over a day with us. It was so good to see him – we laughed and laughed, we caught up, we talked about the future….
By Seth Barnes
07 April 2007, 12:04 am
By Seth Barnes
07 April 2007, 12:04 am 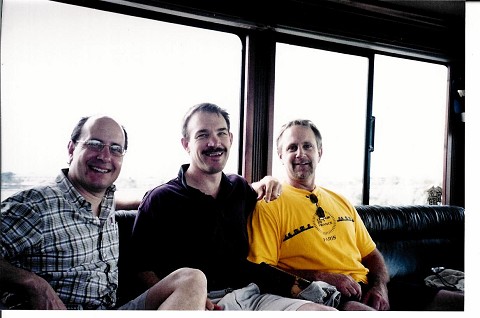 Last week my old friend Damon Ghee made a special effort to see Karen and I after we’d not seen one another for a couple of years. He drove seven hours to spend a little over a day with us. It was so good to see him – we laughed and laughed, we caught up, we talked about the future. In a similar vein, Frederick Buechner recounts a visit from a friend. In reading it, you may want to think about a friend in your life who is going through a tough season and who needs you to visit him or her.

I remember an especially dark time of my life. One of my children was sick, and in my
anxiety for her I was in my own way as sick as she was. Then one day the phone rang, and it was a man
I didn’t know very well then, though he has become a great friend since, a
minister from Charlotte, North
Carolina, which is about 800 miles or so from where I live in Vermont. I assumed he was calling from home and asked
him how things were going down there only to hear him say that no, he wasn’t in
Charlotte. He was at an inn about twenty minutes away
from my house.

He’d known I was having troubles, he said, and he thought
maybe it would be handy to have an extra friend around for a day or two. The reason he didn’t tell me in advance that
he was coming must have been that he knew I would tell him for Heaven’s sake
not to do anything so crazy, so for
Heaven’s sake he did something crazier still which was to come those 800 miles
without telling me he was coming so that for all he knew I might not even have
been there.

But as luck had it, I was there, and for a day or two he was
there with me. He was there for me. I don’t think anything we found to say to one
another amounted to very much or had anything particularly religious about it. I don’t remember even spending much time
talking about my troubles with him. We
just took a couple of walks, had a great meal or two together and smoked our
pipes, drove around to see some of the countryside, and that was about it.

I have never forgotten how he came all that distance just
for that, and I’m sure he has never forgotten it either. I also believe that although as far as I can
remember we never so much as mentioned the name of Christ, Christ was as much
in the air we breathed those few days as the smoke of our pipes was in the
air, or the dappled light of the woods we walked through. I believe that for a little time we both of
us touched the hem of Christ’s garment; we both of us, for a little time
anyway, healed.