Making Sense of Life after the World Race 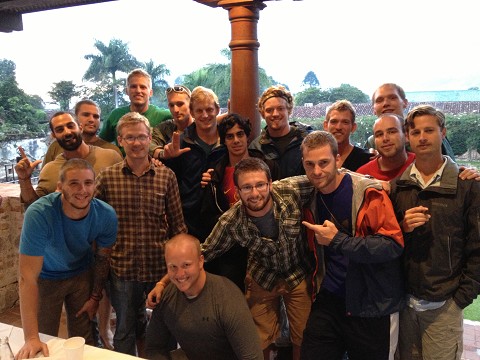 That’s my L squad guys from two years ago in the picture – the ones I coached for a year. I stay in touch with a lot of them and have talked to them at length about “how do we do what Jesus did?” so I don’t worry about them like I do other racers who have finished their race.
Most racers don’t realize that the World Race is just the first year in a three year discipleship process based on Jesus’ model. In fact, if it could be summarized in one word, that word might be “deconstruction.” The Race challenges so many of our preconceptions. It’s a challenging process that most racers struggle to complete. My guess is that maybe 10% of racers finish it.
I was emailing Morgan Mckeown about this. She was on the first official World Race squad in 2007. “Why is re-entry so hard?” I asked. What advice would you give racers?
Morgan wrote the following:

It’s been a long time since I finished the World Race.  Seven years to be exact.  Seth, a line you wrote about reentry deeply struck me…

“This next phase of life you’re going through is a practical season where the high, holy poetry of the soul picks up a dish rag and is confronted with messy spirituality.  We’re not allowed to build booths on the Mount of Transfiguration.  We have to return to a land where checkbooks need balancing and cars need oil changes. “

This messy spirituality was a huge part of my post Race experience. Idealism and reality crashed into each other.  I didn’t know how to live in one without losing the other.

When I got off the Race I was hired as a counselor for people who lost their homes in the 2007 California wildfires.  As we were trained in post trauma reactions, I came to a scary realization…. I was in trauma. I had all the signs and symptoms.  I was grateful for that training because I learned what was helpful in dealing with trauma. That knowledge helped me to walk through reentry with out thinking I was crazy.

There is no denying it; reentry for most Racers is difficult.  It was a very, very hard season for me, but God eventually brought beauty into what felt like a pile of ashes.  After my own experience and being with a lot of other Race Alums in the San Diego area, here are a few of my thoughts.

1.  Have a flexible realistic plan.

This doesn’t mean give up on dreams, but I think it’s almost impossible to dream when you don’t have the finances for your next meal or a home to live in.  I think it needs to be expressed to returning Racers that it’s absolutely all right to take a job for a season or find some stability, but that’s not a place to get complacent. Finding contentment in the season you are in is beautiful, while complacency is the enemy.

2.  Hold on to the dreams God has given you.

Stability is a gift, and it gives space for dreams to take shape. At the same time it’s important for Race Alum to be given avenues to define and pursue the dreams God has given them.

3.  Watch out for post-Race pride.

This is something I often notice when talking with returning Racers.  It materializes in so many ways. It’s a quick slip from frustration with the American church to spiritual pride.

This is imperative. In my experience, it took a ton of time, effort and initiative to build good community around myself.  It didn’t just happen, it was WORK, but it’s been a lifeline.

I had a huge breakdown on January 1, 2008 which I wrote about in I Was Homeless Once. I had told my self that was the day my life would be back together.  Turns out God had a different timeline.  Eventually the pieces fell into place.  It was hard to live in limbo when all I wanted was for my life on the Race to integrate seamlessly with life at home.

This is key.  How does one take all that God taught them on the Race and integrate it with life back in the US?  How do you live a Kingdom minded life in the day to day? How do we give people tools to do that?  What experiences and materials will help… not just those who are called to live in Georgia, but those who want to figure out how to do it in their communities.

How do we help people tread though the difficult season of reentry?  Often times I feel like Racers swing to one of two extremes… staying in a Race type lifestyle at the expense of living things out in their own community, or running the other way, settling too quickly back into the “American Dream,” and loosing any Kingdom dreams conceived on the Race.

I know it’s is possible… maybe it’s time to take a look at people who have had a successful post-Race integration and see what has made it that way.