The first Man Hike this past July was such a great experience that we had high expectations for this second one in the White Mountains of New Hampshire.
The autumn leaves were at their color peak – orange, red, green. Scott Molgard mapped a route that had us hiking four miles straight up the slopes of Mt. Jefferson.
It was as tough a stretch of trail as I’ve been on, oftentimes hand over hand up the rocks and halfway up, it began to snow.
When at last we arrived at our campsite (called “The Perch” for its location high up the mountains), we began to feel the cold down in our bones.That evening found me wearing two pair of long underwear as the snow continued to fall.

The next morning we hiked up past the tree-line where we treated to a spectacular view of the autumn leaves in the valley below. The rains began that night and continued nonstop until we left for the airport. What to do?

The essence of a man hike is the way in which we connect with one another and God. But the next morning, standing forlornly around the fire as the waters fell, we mainly felt soggy and disconnected.
“Let’s sing a song,” Scott suggested.

All I could think of was, “This is the day the Lord has made.”

The singing lifted our spirits a little, so we began to pray for one another. We seemed to be slogging to make any spiritual headway. Then as we split up into groups of three, the atmosphere changed. Though the rain continued to pelt us, we found ourselves breaking through. I can’t tell you how God showed up, but he did. You could see it as guys’ tears mingled with the raindrops on their cheeks. 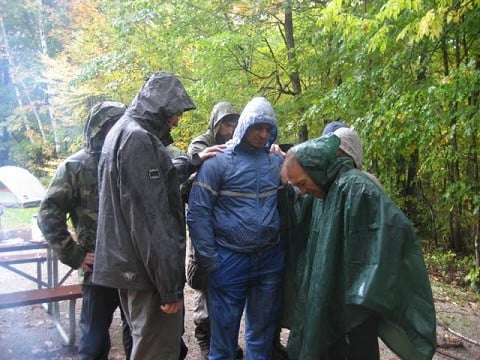 Three hours later, we went not on a hike, but a run along a forest path to a waterfall. And we treated ourselves to a meal afterward at a nearby restaurant.
The magic had happened again. But this time God’s lesson was different: Life throws a lot at you. It often feels like a discouraging rain. Our identity as men is perpetually under attack. But, the choice to persevere and eventually triumph is ours to make.
I think we’re onto something with these man hikes. They tap a deep need we men have. We’re going to be doing a lot more of them — they’re a way to help guys walk in freedom and victory.
Let me know if you’re interested.