Marthe Robin: A life in the spirit

I believe that we can go much further living in the spirit than we do. We need to realize what it means to, instead of living as a human being having a temporary spiritual experience, live as a spiritual being having a temporary human experience.  Brother Yun is someone who understood this. …
By Seth Barnes
14 April 2009, 12:04 am
By Seth Barnes
14 April 2009, 12:04 am 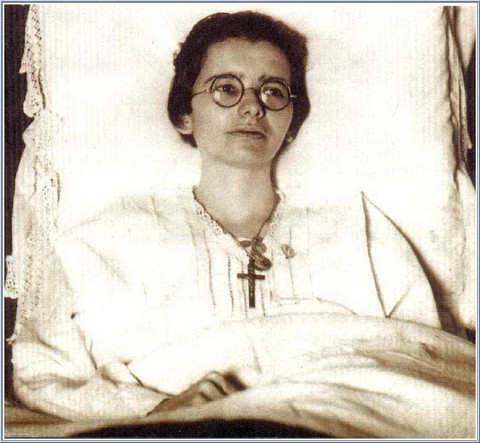 I believe that we can go much further living in the spirit than we do. We need to realize what it means to, instead of living as a human being having a temporary spiritual experience, live as a spiritual being having a temporary human experience.  Brother Yun is someone who understood this. So has Heidi Baker. Their stories and the fruit of their lives show the kind of power available to us if we’ll give everything in our lives to God.

The other day I read about someone who came as close to a life lived purely in the spirit as anyone I’ve ever heard about. Her name was Marthe Robin.*

Robin was born in 1902. She was a Catholic who lived in France. She experienced amazing things in the spirit, but it came at a great cost. From the age of 26 Robin could not eat or drink anything at all. At 28 she was completely paralyzed and bedridden.

For the next 51 years Robin’s only food was the Holy Eucharist which she took weekly. On more than one occasion both he and other visiting priests, saw the bread apparently leap from their hands and fly directly to her mouth.

After taking communion, Robin went immediately into ecstasy and then began her weekly re-living of Christ’s Passion and crucifixion. The stigmata and the scourging, the crowning with thorns appeared on her body. The whole crucifixion seemed to be re-enacted on this little countrywoman.

From the moment of Christ’s death on the cross she too appeared dead. She remained this way until ‘called back’ to life on the Sunday.

Not only did she not eat, she didn’t sleep either. She was in constant prayer and intercession for the world. On the days when she was not reliving the Passion she would receive a stream of visitors. She had the gift of seeing into people’s souls and would very simply tell them what they most needed to hear.

News of her miraculous existence spread throughout the country. For much of her life people lined up to see her. The basic facts of her life are uncontested.  And even now as I recount this, I have to fight my natural Western tendency toward skepticism. Life in the spirit is so foreign to us, we struggle to understand how it works. We have been trained to be cynical and to debunk rather than believe. Yet the Bible tells us that “without faith, it’s impossible to please him.”
Marthe Keller lived a life in the spirit by submitting everything to God. We’re not all called to that level of suffering, but we are called to great intimacy with our Lord. We need to start believing that we can live that kind of life can be ours too.

*Taken from this web site