Missionary life can be comical

I’m in Nicaragua today. We’ve got a base down here that Charles “Carlitos” and Sarah Kaye started. My son Seth is down here discipling a group of young people (see his Thanksgiving pics with the dump people here). Missionary life is full of missteps – times when our best efforts to commun…
By Seth Barnes
07 December 2009, 12:12 am
By Seth Barnes
07 December 2009, 12:12 am 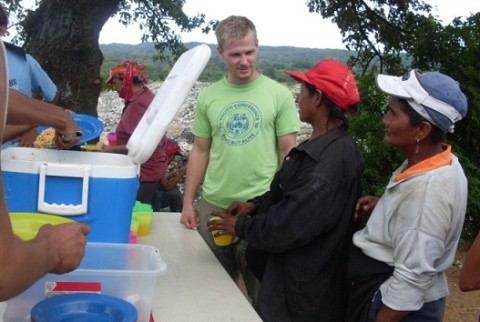 I’m in Nicaragua today. We’ve got a base down here that Charles “Carlitos” and Sarah Kaye started. My son Seth is down here discipling a group of young people (see his Thanksgiving pics with the dump people here).
Missionary life is full of missteps – times when our best efforts to communicate God’s love go awry. I was recently reminded of how ministering in a foreign country using the local idiom can produce comical results when I read J. Lee Grady’s article on his Spanish misadventures.

I’ve heard countless embarrassing stories of how Spanish
has been misused in sermons by American speakers, and some I can’t repeat here.
Once an evangelist visiting Peru exhorted an audience to lift their hands in
worship. He should have said, “¡Levante sus manos!” Instead he
exclaimed, “¡Levante sus monos!” which means, “Lift up your monkeys!” (I
am sure the worship was especially joyful that morning.)
Once when I was in Venezuela with a group
of ministers, our hosts took one of the women speakers to a churrasquería,
a restaurant that specializes in piling your plate with multiple pounds of
grilled meats including lamb, beef, sausage, pork and chicken. When the lady
came back to the hotel I wanted to say, in Spanish, “You had a lot of meat.”
What I told her, in front of seven horrified friends, was that she was fat.

In some countries, calling a  person “fat” can be a term of endearment. Call an overweight girl a “gordita,” and it can be like affectionately pinching her cheek. My coworker Erasmo always used to talk about how  he wanted to marry a large gordita “She needs to be at least 200 pounds so she could protect me,” he’d say. He married a pastora (a lady pastor) instead. I’m sure she’s doing a fine job of protecting Erasmo.
I remember a time when a friend of mine working in Mexico tried to ask a 13 year-old girl if she was hungry. What he should have said was, “Tienes hambre?” What he said instead was, “Tienes hombre?” Which means, “Do you have a man?” She looked at him in shock, not knowing what to say.
In English, we would call such instances embarrassing. But even communicating that concept in Spanish has compounded the awkwardness. On several occasions I’ve watched people try to explain how embarrassed they were. “Estoy muy embarassada,” they exclaimed, which, when translated, means “I’m very pregnant.”
Ministering cross-culturally is fraught with land mines, big and small. If you’re called to it, failing is a part of the job description. The only way to cope is to make sure your sense of humor is an essential part of your packing list.