Sometimes the stories of the young Swazis we encountered during our ’04 outreach reduced us to tears. They wrestle with such hard, raw issues. You can see some of what happened below in the movie Dear Francis . Simphiwe During my first day at school I was shocked to see a boy of 1…
By Seth Barnes
18 January 2007, 12:01 am
By Seth Barnes
18 January 2007, 12:01 am

Sometimes the stories of the young Swazis we encountered during our ’04 outreach reduced us to tears. They wrestle with such hard, raw issues. You can see some of what happened below in the movie Dear Francis
. 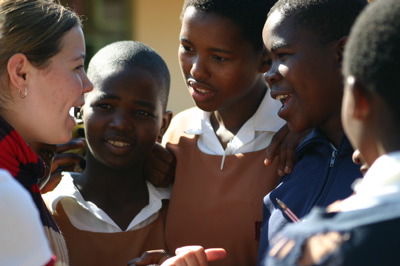 During my first day at school I was shocked to see a boy of 13 years crying. I tried to calm him and he cried even louder. I didn’t know what to do, I just prayed, “God you are the Father.” When I asked the boy what was wrong he said he was 3 years old when his mom left him and when he was 7 years his dad left him and his life changed. He started eating out of dustbins. He said when we showed the movie, he was saw that he was living a life just like Musa. The boy said he needs someone who will care for him.

The students really opened up to us. They talked freely about their feelings and thoughts. They listened to us – more especially when we shared our own life experiences. They really loved it when we talked about our own lives. I also think that they are going to change their actions and their way of thinking and start getting serious with life. God as blessed our country, Swaziland.

One day, I was invited to play along with some orphans who were playing a pick-up game of soccer. It was probably the most fun I’ve ever had in my life. What struck me as an absolute blessing was the fact that one, who seemed to be suffering from spinal infirmity (as there were many disabled orphans), was playing as hard and as rough as the others. This touched my heart because many who suffer from any type of disability (including myself) seem to be pessimistic and upset by their circumstance. Yet, here was this child, suffering, playing as if he did not even consider it. An 8 year old challenged me to accept my own personal infirmity and carry my cross without fear – indeed, to embrace it with no regret or resentment, but with love and humility.

I have been a Christian for some time and have led about 10 people to Christ. Now at the school I was preaching abstinence and God just took control and I made an altar call where I had about 80 students come to Christ.

It was a Wednesday morning when a certain boy came to me during the break time. I was pleased to meet him because he was one of my students in the Form 3 class. He stated clearly that what he was about to tell me was very personal and that he trusted me, which was why he had come to me. He told me that between the ages of 14 to 17 he was raped by his grandmother with whom he usually stayed. He moved away from her but his heart couldn’t forget it. Now, my question to him was, “Did you forgive your grandmother when you got saved?” He replied that it was too difficult, because today when he sees her he feels like killing her. So I talked to my group and with his permission we called him to prayer. We prayed for a forgiving heart for him and one of my group members took him for counseling. After that he was a bit relieved.

Whilst talking about the movie with the students, one of the girls asked why Thandi did not speak out about what the teacher had done to her. We spoke about the fear and shame Thandi must have experienced. I then shared my story of how I was almost raped by a relative. I had to speak out and say and tell my family what had happened, even though I was scared. I spoke out and he knew never to mess with me again. With my story I encouraged them to break the silence. Then the girl in the class said that she had been raped by her stepfather. She had kept it to herself because the stepfather had threatened to violently abuse her mother even more than before. I could say that I could not fully understand her pain but I understood her fear. For a long time she had closed up and felt alone. After counseling her, I led her to forgive her stepfather so that she can smile again. It was not easy but she did and for the first time since the rape, she smiled again. Later she told me her classmates and family were so amazed at the sudden change in her life. Having brought back the joy in her life through God, I felt very happy and used by God.

There is this child who lived with her father and step-mother. The father lost his job, and she had to stop schooling. She went to the city where a woman took her in, and through the church they raised money for her schooling. But she couldn’t find a school in the city, so they found a school in a village that would take her. She had to stay with strangers, who treat her like a slave and she has to do the cooking but barely gets a chance to eat anything. Sometimes she comes late to school because she has to do some errands. I could see the pain in her eyes because she wants to be in school but she has nowhere else to go. She was afraid to tell anyone because the people she lives with had threatened her. I didn’t know what to do as the child was in tears. I told her that God will open a way for her. That night I cried to God for an answer. God showed me the career guidance teachers, who are Christians. They were also having a problem with the child but could not figure it out. When I explained what the problem was one of them offered a place for the child to stay in the quarters.