If you’re the parent of a Christian teenager, Kenda Creasy Dean has this warning: 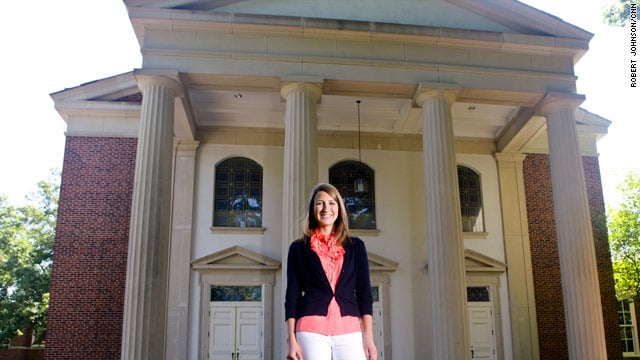 Your child is following a “mutant” form of Christianity, and you may be responsible.

Dean
says more American teenagers are embracing what she calls “moralistic
therapeutic deism.” Translation: It’s a watered-down faith that portrays
God as a “divine therapist” whose chief goal is to boost people’s
self-esteem.

Dean is a minister, a professor at Princeton
Theological Seminary and the author of “Almost Christian,” a new book
that argues that many parents and pastors are unwittingly passing on
this self-serving strain of Christianity.

She says this “imposter” faith is one reason teenagers abandon churches.

“If
this is the God they’re seeing in church, they are right to leave us in
the dust,” Dean says. “Churches don’t give them enough to be passionate
about.”

Dean
drew her conclusions from what she calls one of the most depressing
summers of her life. She interviewed teens about their faith after
helping conduct research for a controversial study called the National
Study of Youth and Religion.

The study, which included in-depth
interviews with at least 3,300 American teenagers between 13 and 17,
found that most American teens who called themselves Christian were
indifferent and inarticulate about their faith.

The study
included Christians of all stripes — from Catholics to Protestants of
both conservative and liberal denominations. Though three out of four
American teenagers claim to be Christian, fewer than half practice their
faith, only half deem it important, and most can’t talk coherently
about their beliefs, the study found.

Many teenagers thought that
God simply wanted them to feel good and do good — what the study’s
researchers called “moralistic therapeutic deism.”

In “Almost Christian,”
Dean talks to the teens who are articulate about their faith.

No matter their
background, Dean says committed Christian teens share four traits: They
have a personal story about God they can share, a deep connection to a
faith community, a sense of purpose and a sense of hope about their
future.

“There are countless studies that show that religious
teenagers do better in school, have better relationships with their
parents and engage in less high-risk behavior,” she says. “They do a lot
of things that parents pray for.”

Dean, a United Methodist
Church minister who says parents are the most important influence on
their children’s faith, places the ultimate blame for teens’ religious
apathy on adults.

Some adults don’t expect much from youth
pastors. They simply want them to keep their children off drugs and away
from premarital sex.

Others practice a “gospel of niceness,”
where faith is simply doing good and not ruffling feathers. The
Christian call to take risks, witness and sacrifice for others is muted,
she says.

“If teenagers lack an articulate faith, it may be
because the faith we show them is too spineless to merit much in the way
of conversation,” wrote Dean, a professor of youth and church culture
at Princeton Theological Seminary.

More teens may be drifting
away from conventional Christianity. But their desire to help others has
not diminished, another author says.

Barbara A. Lewis, author
of “The Teen Guide to Global Action,” says Dean is right — more teens
are embracing a nebulous belief in God.

Yet there’s been an
“explosion” in youth service since 1995 that Lewis attributes to more
schools emphasizing community service.

“I
see an increase in youth passion to make the world a better place,” she
says. “I see young people reaching out to solve problems. They’re not
waiting for adults.”

David
Wheaton, an Atlanta high school senior, says many of his peers aren’t
excited about Christianity because they don’t see the payoff.

“If they can’t see benefits immediately, they stay away from it,” Wheaton says. “They don’t want to make sacrifices.”

How ‘radical’ parents instill religious passion in their children

Churches, not just parents, share some of the blame for teens’ religious apathy as well, says Corrie, the Emory professor.

She
says pastors often preach a safe message that can bring in the largest
number of congregants. The result: more people and yawning in the pews.

“If
your church can’t survive without a certain number of members pledging,
you might not want to preach a message that might make people mad,”
Corrie says. “We can all agree that we should all be good and that God
rewards those who are nice.”

What can a parent do then?

She
says parents who perform one act of radical faith in front of their
children convey more than a multitude of sermons and mission trips.

A
parent’s radical act of faith could involve something as simple as
spending a summer in Bolivia working on an agricultural renewal project
or turning down a more lucrative job offer to stay at a struggling
church, Dean says.

But it’s not enough to be radical — parents must explain “this is how Christians live,” she says.

“If
you don’t say you’re doing it because of your faith, kids are going to
say my parents are really nice people,” Dean says. “It doesn’t register
that faith is supposed to make you live differently unless parents help
their kids connect the dots.”
Read the rest of the article here.