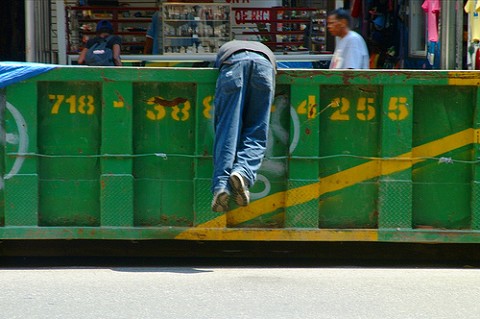 Photo by Mike Sheehan
33 years ago I began recycling garbage. I don’t know if we helped invent dumpster diving, but David and I were the first ones I ever knew to do it. Here’s the story.
My friend, David Wroughton, and I were born entrepreneurs. My lawn mowing business in high school was a good start and we took it to the next level in college in the form of a janitorial service that David and I owned.
One night as we were cleaning up a  commercial enterprise, we got a bright idea, “What would we find if we looked through the garbage at a restaurant?”
So we went behind a seafood restaurant we liked.
What we found was a lot of food, but on the whole, it was pretty gross. Not anything you’d want to eat. So then we thought, “What about at the local grocery store? What do they throw out?”
We drove over to the Jewel Grocery Store and what we found in the garbage bins blew us away. It was all still in its packages, thrown out because its date had expired, but still quite edible. We loaded up the car and began an illustrious career as dumpster divers.
Some nights were better than others, but you could almost always count on finding something. Once we found over $200 worth of frozen shrimp. Usually there were loaves of day-old bread. Sometimes we’d drive away with our car packed to the gills with food. On one occasion we found stacks and stacks of eggs – hundreds of them still in their cartons. Some nights when the haul was great, you returned home feeling like a triumphant conquistador.
For those of us trying to live cheaply at Wheaton College, dumpster diving was a gift. We fed our house of six and a number of other students as well.
It was also an adventure. You never knew who you might encounter as you scrounged in the dumpster – often policemen came cruising by and waved at us. Once word got out about the sort of treasures you could find for free, we had competition from other students.
Of course the world caught up with us. I’m told that these days it’s hard to find the kind of food hauls we used to encounter. Afraid of law suits, some stores got fancy trash compactors. But garbage is still a thriving source of livelihood around the world. Everywhere our mission teams go, they minister to those who pick through garbage dumps for scraps. Some people look down their noses at their stinky jobs. I prefer to think of them as guerrilla activists in the green movement – retroactive recyclers keeping the planet clean.
Hard times force people to do what God has always blessed – gleaning is in the Bible, even the disciples did it. Waste not, want not. I’m interested to know – have you had experience with modern day gleaning?
Learn more about how to do it at this website.