This awful situation that my friend John has been confronting (see this blog) brought to mind my own story of how I woke up to the fact that there is a spiritual realm that I’d largely ignored. My hope in sharing it is that it will bolster your resolve to move beyond a faith that may be of l…
By Seth Barnes
13 March 2008, 12:03 am
By Seth Barnes
13 March 2008, 12:03 am

This awful situation that my friend John has been confronting (see this blog) brought to mind my own story of how I woke up to the fact that there is a spiritual realm that I’d largely ignored. My hope in sharing it is that it will bolster your resolve to move beyond a faith that may be of little consequence to the enemy. We need more warriors – I’ve committed my life to rousing and preparing them. The world’s need is too urgent and our couches are too soft. 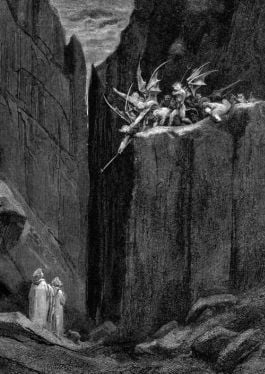 So here we go – I was raised in an evangelical free church that didn’t talk about the devil in anything more than an abstract way. He and his pals were this wasps’ nest down the street that we understood we were to stay away from.

When I entered my 20’s, I began to bump up against the notion of a personal evil as I read the book The People of the Lie. So one day I made an appointment with the Episcopal rector and asked him what he thought about it. His answer left me scratching my head.

The Methodist Church I attended for a while at business school was no help at all. It wasn’t until I was in my 30’s that, as an elder in the Presbyterian Church, I finally began to come face to face with the reality of a personal evil.

We were a pretty innocuous bunch. We would have epic struggles over bringing a praise band into church. For all that, we did have one redeeming feature, we believed the Bible is God’s word to man.

One day a housewife who attended church came to the elder board and said, “I have been sick almost all my life. Will you pray for me to be healed?” This was a moment of cognitive dissonance for us. We were stuck. On the one hand, we had never done anything like this before. On the other hand, James 5:14-15 says, “Is any one of you sick? He should call the elders of the church to pray over him.” It concludes by saying “you’ll be made well.” That said, this woman’s symptoms were a little spooky.

She had been sick all her life for no apparent reason. Recently, her family was being tormented by unseen forces in bizarre ways. The husband at one point found himself pinned to the floor, unable to move. The pre-adolescent son kept having sexual thoughts. The daughter saw floating lights moving around her room.

So, while we ostensibly came to pray about the woman’s sickness, we had a feeling this might get “complicated.” We suspected we might be in over our heads, but pressed on anyway.

The prayer session went on for a little over three hours. We could sense an evil presence, but it seemed to hiding (we later found out that, in spiritual warfare circles, this phase is known as “pretense”). I don’t know why we persevered, as clueless a bunch of elders as ever there were. But we kept pressing forward in prayer until suddenly and shockingly, the woman spoke in a deep male voice: “I’ll kill her! I’ll kill her! She’s mine! She’s mine!” It spat at us.

“Whoa.” I thought.” This woman I know, but who the heck are you?” It was not an act. Something horrible and evil was challenging us for control of this woman. We were living a scene from the Exorcist. People, until you’ve been where I was, this stuff is hypothetical. That exchange put an end to whatever theology I’d clung to about Christians not having demons. Seeing is believing.

I wanted to run out the back door and all the way home. Here we were in a normal-enough living room, but what followed was anything but normal. We regrouped afterwards and came to the conclusion that, whatever good we’d done, there was still more to do and we still didn’t have a clue. I went and got my charismatic Catholic neighbor to help. Thus reinforced, the next afternoon we came and spent the better part of eight hours praying demons out of the woman and the house. At the end, she and her family were clean. All the harassment they’d suffered was over (though she reported to me later that at one point she could feel a demonic claw on her eyeball one morning). And 16 years later, they are still doing great, and are leaders in their community.

Karen and I immediately began reading everything about spiritual warfare we could find. And a parade of people who needed deliverance began showing up at our pastor’s doorstep. We saw some wild, wild stuff. One day an unseen force opened the cupboard doors and the dishes came spilling out at her. This was an invasion of our home! We began to press in even more to our authority in Christ. We began to see how lilly-livered we’d really been all those years and thought, “Oh well, better late than never!”

This blog is already way too long, but many Christians out there are basically agnostic about the reality of a personal evil that wants to destroy them. I’ve seen too much to bury my head in the sand again and hope that somehow you’ll wake up. Please do yourself a favor and start reading up on the subject. Please, decide to start wielding the authority you’ve been given to roust the enemy out of his comfort zones – you are not merely the object of God’s affection, you are a battle axe in his hand.

To get started I recommend the following books: