My Poem: Seeking The Blessing of a Father

I thought about what I could give you that might be a gift this Christmas. Maybe a small piece of my often over-protected heart? Maybe the story of how I’ve sought my dad’s blessing?  How many of us struggle to receive a father’s blessing? I think we all do. And if we receive it, is it wh…
By Seth Barnes
19 December 2018, 12:12 am
By Seth Barnes
19 December 2018, 12:12 am 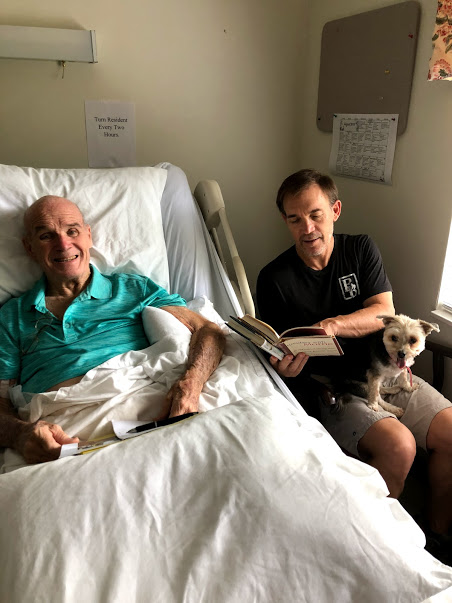 I thought about what I could give you that might be a gift this Christmas. Maybe a small piece of my often over-protected heart? Maybe the story of how I’ve sought my dad’s blessing?

How many of us struggle to receive a father’s blessing? I think we all do. And if we receive it, is it what we need? This past year I’ve been caring for my dad. My father, the doctor and army colonel. The Yale grad. The man who has saved thousands of lives in wars and in hospitals around the world.

I’ve had my own battles to fight. One of them was to know that I was enough, that my father blessed me. He’s loved me the best he could, but it didn’t always translate to a language my heart could hear.

This past year I’ve been his caregiver. It’s been a hard year in which he’s almost died. He needed surgery. He came out of it paralyzed. I see him almost every day and leave him with a prayer.

I wrote this poem about it. Maybe you can see yourself in it somewhere.

Seeking The Blessing of a Father

Shaken against the fathers –

The mess beneath their roofs.

Time begins with a father

I wanted that in my personal darkness,

But had no words to speak over it,

And no one to speak them.

Of the pieces needing to be knit together,

Needing to be called good.

What is the job of a father?

If not to pull together the parts

Of creation under his roof

That want to fly apart?

To find the good in them?

The fathers had gone on a walkabout;

My father sat on the couch,

But he had joined them.

And I made my own covenant with creation –

I would do likewise.

I received what he could not give

When I needed it most.

He breathed a prayer and squeezed my hand.

Was that a blessing?

Was it a prophetic reaching

For a future reality?

Who was holding the hand of a father,

Joining him in the act of bringing order?

My life still has its messy parts,

That defy the script,

That have been waiting all these years

For a father’s blessing –

“May your kingdom come.”

Can I stop looking now?

If it wasn’t a miracle,

I am going to call it one.

But they brought him home from his walkabout;

They brought heaven to earth.

CNN has one story to tell,

But I have seen with my hearts’ eyes

That the creation story continues –

There is a chaos that I hover over