My son goes looking for Magdala 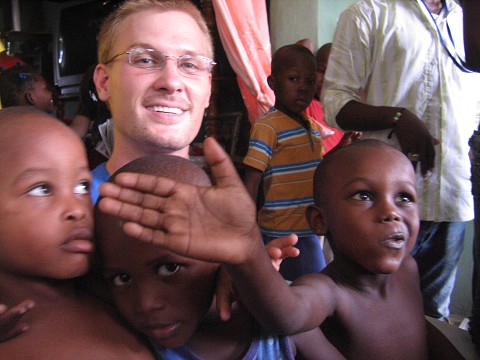 As we walked up to their orphanage and introduced ourselves to the
people in charge, I watched for Magdala. I wondered if she’d be one to
come running or if she was the shy type.

Children began poking
their heads around the corners and smiling. One little boy, who looked
about seven years old, had bumps all over his shoulders, chest and back.
He smiled as he walked up to me. Taking my hand, he placed it on his
scabied upper body. If I were his size I would be hugging him. Instead
my arm simply dangled at his side. He didn’t let go of my hand either.
He turned around and began surveying the room, as if he finally felt
safe enough to take in his surroundings.

I looked up from him to
the hall behind where we stood, which led to a courtyard in the back.
Other children appeared from the end of the hallway and ran by. With
each girl that ran past, Magdala’s name resonated in my mind.

I
asked the little boy his name. Jubie. He then held fast to my shorts as I
shuffled down the hallway. Shuffled because another little boy led me
forward, holding my shorts as well. His stride was short and he stayed
close to me.

I rounded the corner at the end of the hall and
tried my luck at conversation with one of the men. I asked him about
Magdala.

I wondered
if she’d left or if something happened to her. I looked around at the
kids, hoping to find her. Maybe I was pronouncing it wrong. I tried
several different ways. Nothing. Jubie wandered off with some friends.

A
woman came up to us to help. Then it hit him. 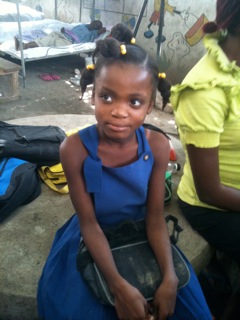 “Magdala!” he
said, excited that he had remembered. Looking back, it’s easy to see why
he would forget her. There were 125 other orphans! He looked around at
the others and said something in Creole. They started yelling all around
for Magdala. A minute later a little girl in a white princess looking
dress, all chock full of fluff and lace, walked slowly up. Her hair was
put up in hair ties, poking in several different directions. Magdala.

I spent some time with
her. I told her with the help of a translator how loved she was and how
people were thinking about her and praying for her back at my home. She
accepted the doll and letters written to her in a room with just a few
of us so as not to make the other orphans feel badly or left out. One of
them started crying in the window behind me.

After a few
minutes, I made my way to the front room and sat down. Jubie found me
again and held my hand. I asked him his name again. I wrote it down. Two
others quickly ran up
to me and told me their names. They motioned for me to have them written
down on my scrap piece of paper as well. Billie and Wenley. A little
girl did the same. She tried unsuccessfully to hold back a smile as she
told me her name. Sagafina. She was shy, but her presence was light and
peaceful. They may as well have said, “Don’t forget my name either!”

They
wanted to be remembered. Like Magdala was remembered. They hung on me
and fought for my attention, starving to be noticed.

Five minutes
later I walked out of the orphanage. Jubie followed close behind,
hanging onto the back right leg of my shorts. I said goodbye and they
waved as we left.
The children of the Son of God orphanage live in a condemned building and often eat just one meal a day. It costs $95 to feed all 125 for a day. If you’d like to help feed them, here’s a link (note Son of God orphanage).