My life is unusual – at any given time of the day or night I might get a phone call or an email from some random part of the world asking for prayer or help. This past week, for example, Rusty Jackson, our leader on the January ’08 World Race team, called from the Miami airport (en route from B…
By Seth Barnes
20 April 2008, 12:04 am
By Seth Barnes
20 April 2008, 12:04 am

My life is unusual – at any given time of the day or night I might get a phone call or an email from some random part of the world asking for prayer or help.

This past week, for example, Rusty Jackson, our leader on the January ’08 World Race team, called from the Miami airport (en route from Bolivia to South Africa). Steve had just lost his passport. Alarm bells sounded and we made arrangements to take care of him. Later he found it a hidden compartment in his new bag.

Some hours later, Rusty called as the team was in New York. Meredith‘s ears were killing her and she had to get off the plane and stay behind. We got some people we know to take care of her and after healing for a few days, expect her to be soon leaving for Africa to catch up with her team.

On an average day I might write a hundred emails, read a couple of dozen blogs, and receive any number of reports. It’s nothing but a privilege to see what God is doing. I wouldn’t have it any other way. Here is a sampling of a few recent reports from our teams going around the world:

From our squad in Guatemala:

This month ministry was intentional. We prayed daily, “Lord this day and time is not ours but yours, do what you have with us.”

From our squad in Swaziland: 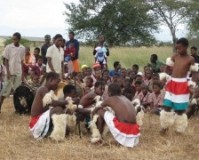 As we waited for
the prince [of Swaziland] to arrive… I had the
opportunity to get to know some of the kids.

There were three girls in particular I just fell in love with.

They hung around me and one held tight
gripping my arm.

Later on as
I had my arm around her and was rubbing her back lightly, she looked up at me
with big dark brown eyes and asked, “

Can
I go home with you?”

From our squad in Bolivia:

We summited
the 17,000 foot mountain after right around two hours. I have never been
at such an altitude and the last bit was the hardest.

The air was so
thin and my legs felt leaded down. At the top, a beautiful thing was
waiting.

From training camp in Gainesville, GA:

I guess I don’t fit the profile of a
“typical” racer. At 30, I am one of the “older” ones, relatively
speaking.

I have been through college and grad school. I have the
husband, the house, the car, the pets, and about ten years invested in
my career.

So what I’m about to do in giving up almost every aspect of
stability and comfort that I’ve grown accustomed to is in stark
contrast to what most people at my stage of life are doing. Read more…