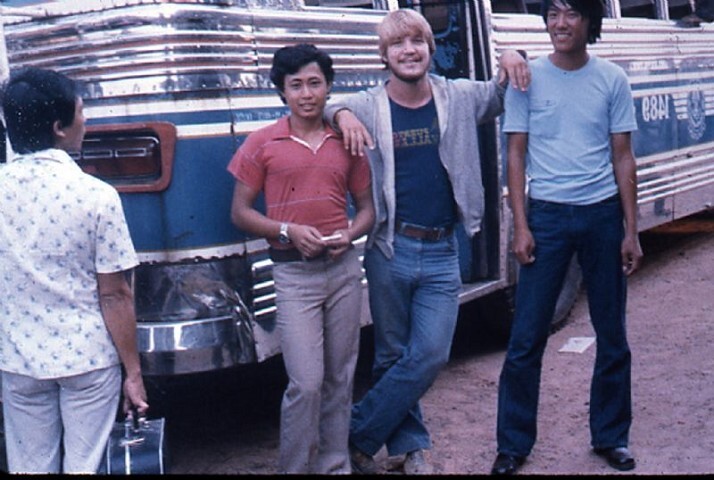 What would you do if you were going to be killed because you were smarter than your peers? Would you lie about your background?
Last month I was talking Ben, to our local A/C repairman. As I recounted in a blog post, we discovered we had been at the same refugee camp in Thailand 41 years ago. It was wonderful to go back to my scrapbooks and show Ben. As I did so, I came across my notes on the amazing story of my translator, Mate Saly.
When the Khmer Rouge took over Cambodia in 1975 and began killing people, Mate was still a high school student. To talk to Mate you would never suspect the horrors that he endured. Here is how he shared his story:
“My father is a doctor.  I wanted to be a doctor like him,” he told me.  “But Pol Pot wanted to kill all the students and educated people, so I threw away my degree.  I used to speak English and French better, but I had to stop speaking any language other than Khmer or I would have been killed.
This was a very dangerous time. The Khmer Rouge accused me of being a student. To answer them would have meant certain death, so in a moment of inspiration, I pretended to be crazy.

I began laughing, singing, and running around. They didn’t know what to do with me. I took off all my clothes and ran around naked.

I wouldn’t sleep in a bed, instead sleeping under the stilt-house in the sand with dogs. Knowing that my life hung in the balance, I was willing to do anything.

Every day they would wake us up at gunpoint and send us to the rice fields. After a year and a half, I got malaria. A friend found a Canhkina tree in the forest and made some medicine which saved my life.

I must have been in a state of shock most of the time.  There were ten of us in the forest. We lived off of the bamboo shoots, bananas, and coconuts that we were able to scrounge.
I was very afraid and knew that if I didn’t get out of there, I would die.  We had seen them cut the necks of about 25 people. So, I fled into the forest, barely escaping with my life.  In 1976 Pol Pot forced everyone out of the capital of Phnom Phenn.  My family all went to the town of Kamponham.  People were being killed all over the place.  I didn’t know what happened to my family.  Later I found out that all of them were shot.
Eventually we made our way to a village where we hoped to find food.  This was a very dangerous time. I wouldn’t sleep in a bed, instead sleeping under the stilt-house in the sand with dogs.

Every day they would wake us up at gunpoint and send us to the rice fields.  After a year and a half, I got malaria. A friend found a Canhkina tree in the forest and made some medicine which saved my life.

Then in 1978, Viet Nam attacked.  My friend and I knew that this was the best chance we might have to escape, so at midnight one night, we slipped out of the village and made our way to Battanbong.

From there we fled into the jungle. It was hot and dense and hard to walk through. We walked about a hundred miles in 32 days.  We were very hungry when at last we came to a camp along the border, but at that point we knew we were going to live.”
*    *    *    *
The life of a refugee is so traumatic. We are a nation descended from refugees and pioneers that has been historically welcomed those fleeing persecution. What is your attitude toward refugees? I think about the courage and inspired improvisation of Mate Saly and wonder where he is now. Was he able, like Ben, to make a life for himself in another country while still staying in touch with his Cambodian heritage?

The following is the rest of the story about Som, a paralyzed woman Megan Kennedy met in Cambodia…
03 September 2013

Megan Kennedy shares this touching story from Cambodia. On a small plot of land just outside t…
05 September 2011