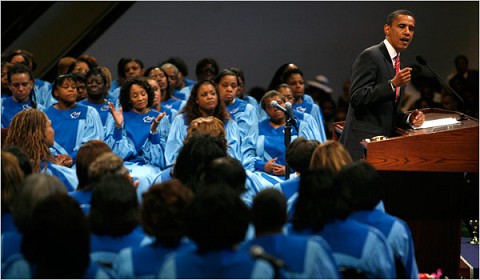 Senator Barack Obama took part in Sunday services at the Apostolic Church of God on Chicago’s South Side.

In an address that was
striking for its bluntness and where he chose to give it, Mr. Obama
directly addressed one of the most delicate topics confronting black
leaders: how much responsibility absent fathers bear for some of the
intractable problems afflicting black Americans. Mr. Obama noted that
“more than half of all black children live in single-parent
households,” a number that he said had doubled since his own childhood.

“Too
many fathers are M.I.A., too many fathers are AWOL, missing from too
many lives and too many homes,” Mr. Obama said to a chorus of approving
murmurs from the audience. “They have abandoned their responsibilities,
acting like boys instead of men. And the foundations of our families
are weaker because of it.”

Accompanied by his wife, Michelle,
and his daughters, Malia and Sasha, who sat in the front pew, Mr.
Obama, the presumptive Democratic nominee, laid out his case in stark
terms that would be difficult for a white candidate to make, telling
the mostly black audience not to “just sit in the house watching
‘SportsCenter,’ ” and to stop praising themselves for mediocre
accomplishments.

“Don’t get carried away with that eighth-grade
graduation,” he said, bringing many members of the congregation to
their feet, applauding. “You’re supposed to graduate from eighth
grade.”

His themes have also been sounded by the comedian Bill Cosby,
who has stirred debate among black Americans by bluntly speaking about
an epidemic of fatherlessness in African-American families while
suggesting that some blacks use racism as a crutch to explain the lack
of economic progress.

On the campaign trail, Mr. Obama has frequently returned to the
topic of parenting and personal responsibility, particularly for
low-income black families. Speaking in Texas in February, Mr. Obama
told the mostly black audience to take responsibility for the education
and nutrition of their children, and lectured them for feeding their
children “cold Popeyes” for breakfast.

“I know how hard it is to get kids to eat properly,” Mr. Obama said at the time.

The
remarks Sunday were Mr. Obama’s first since he claimed the nomination
that have addressed the problems confronting blacks in a comprehensive
and straightforward way. While Mr. Obama’s remarks were directed at a
black, churchgoing audience, his campaign hopes they resonate among
white social conservatives in a race where these voters may be up for
grabs.

On Friday, Mr. Obama said he would co-sponsor a bill, with Senator Evan Bayh,
Democrat of Indiana, that his campaign said would address the “national
epidemic of absentee fathers.” If passed, the legislation would
increase enforcement of child support payments and strengthen services
for domestic violence prevention.

Mr.
Obama spoke of the burden that single parenthood placed on his mother,
who raised him with the help of his maternal grandparents.

“I
know the toll it took on me, not having a father in the house,” he
continued. “The hole in your heart when you don’t have a male figure in
the home who can guide you and lead you. So I resolved many years ago
that it was my obligation to break the cycle — that if I could be
anything in life, I would be a good father to my children.”