One day in a Romanian village

Waking up all I saw was pitch darkness. I heard some voices coming from the floor below me. Who the heck is that, I remarked to myself as I rolled over. The cushion beneath me was quite a surprise, a stark difference from what I had been used to. The voices continued blabbering sounds that I couldn't comprehend. Was I in Ukraine, a train, Guatemala? Suddenly I realized the darkness was due to my red eye covering that was banded around my head. Lifting the shade from my eyes, a bright laser beam coming from a box in the middle of the wall zapped me. All at once it hit me; I was in Romania.

"Don't look at the dead chicken….don't look at the dead chicken," I chanted to myself as I lugged a wheelbarrow full of sewage and a disintegrating chicken up a hill. Earlier that morning we had a meeting with our new contact, John. He asked us what kind of projects we were interested in, and I felt led to led to do two things:  Lead a Bible study twice a week, and find service projects to do every day. John seemed excited because he feels that the best way to reach his community of gypsies is to serve them. Within the hour my squad-mate Ben came flying through the door, "Marisa, I found a 500 year old woman cleaning her gutters." I was on it.

Grabbing the closest person to me, Katie and I went on a search for our 500 year old Grandma. We found her in a ditch digging out a backed up sewage line. She was wearing all black, which only means one thing…someone recently passed away and she was in mourning. 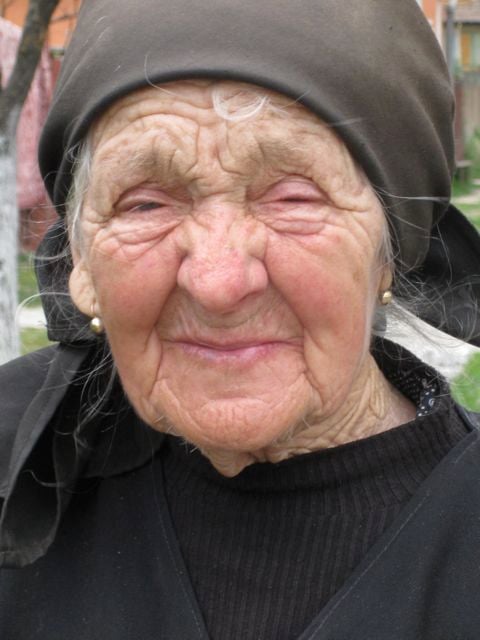 She obviously didn't speak our language so we simply grabbed her shovel from her deformed hands and started scooping the juicy turd pies into the bin. As we dug, Grandma insisted on helping us. Ben's estimate was close but I am going to say that Maria was closer to 80 than 500. Her face held so much beauty in every crease of her hard-worked skin and her white stray hair that fell out of her black head wrap.

We worked for a good hour when a familiar face came riding up on his bike. His name was Bogden, a 21-year old goofy guy that came to our campfire the previous night. Imagine a farm-hand kind of guy, class clown, southern football player who ONLY thinks about girls and drinking beer. He watched us for a good five to ten minutes before he came up with the idea of helping us.

Now, Bogden only speaks Romanian, and despite the fact that he knows we don't, he talked constantly, only stopping a time or two to pull out a fake rose that was in his pocket as he made over-exaggerated smooching noises. He gave the rose to me so that I could smell it and then quickly took it back. A little while later he was getting kind of dirty so he gave it to Katie to hold onto for a little bit.  Soon it was Katie's turn to take the next load up the hill. About the same time as she got to the top, a pretty gypsy girl walked past us.
The scattered Bogden said something to her as he reached in his pocket. He looked down in disbelief-where was his smelly rose? The moment was priceless as I yelled to Katie to hurry up and give his rose back to him. Unfortunately, the gypsy girl didn't feel like waiting. She turned around, whipping her hair in the wind, walked a bit and then turned around one last time to give him goose bumps all over. His stout frame slumped over after she turned back around. He had been planning giving her that rose all day, and now he was stuck in a ditch with two Americans and old woman who's false teeth moved when she talked to us. I did my best to console him as Grandma rolled her eyes and laughed.
I am still laughing. I love this life, and the opportunity to serve these people. There is much work to do here and we are THRILLED!