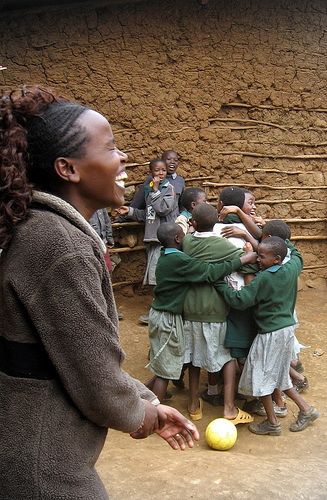 We went to the Bungoma Hospital at 7am to pray for the sick.  We only had about 15 min. in the women’s ward before the nurses shooed us away because they were mopping the floor.  We had only prayed with a few people without translators so it was hard to really know if anything was happening to people.
Honestly, I left a little disappointed, I wanted to pray longer, but we had to go wait outside the gate for the other teams.  While we were waiting, a lady hopped off a motorcycle with her husband.  As soon as I saw her cane and realized that she was blind, I wanted to pray for her.  So we went over and asked if we could.  She agreed.
I put my hands over her eyes and asked Jesus to come and give her sight.  I asked that the Kingdom of Heaven would invade the Kingdom of Earth over her body.  As she started to pray and thank God we asked her if she could see anything.  She said she felt a heaviness on her eyes and something like energy in her eyes.
We said, “Good.  That’s the Holy Spirit.  Let’s pray again.”  Two minutes later after we had prayed again, we asked, “Now what do you see?”
She responded, “I see black and white swirling around.”  We thought, ‘Good.  That’s progress.’ and we prayed again.
This time she was bawling and began pointing at us exclaiming, “You’re a man!  You’re a woman!  You’re white!  Praise Jesus!”
There was nothing like jumping up and down with a woman who could look me in the eyes and focus on my face.  Her joy was infectious.  Seeing her timid husband with tears in his eyes made the truth of the moment all the more clear-Jesus had just touched them.  They walked away changed and they’ll never return the same way again.