Orphan under a train seat

4 weeks ago a woman named GRACE came to Seth Barnes and some of us racers our first week here in India. Please read this blog, click here, to
see this great story and testimony. From this story, T Squad took up a
collection of our own personal money to give to this woman. Before we
could give it to her she had left to the train she wanted to catch.

We
gathered this money and called it Grace’s Fund. During the month of
January, each team was given an equal share of this money. They could
give it to a person in need in the name of Grace.

Well there is a woman, a little girl, an infant in fact, that I am giving my portion to. Her story is absolutely amazing!

I’m sitting in the office  of GEMS, www.gemsbihar.org,
the amazing organization here, checking emails with a few other
teammates. One teammate comes up the stairs and says, “Have you seen the
girl from the train?”

My
teammate says, “A little girl, 7 days old, was brought here last night
at 2 in the morning. She was found under the seat of a train. The train
was headed from Nepal, to here India, and she was found left abandoned
wrapped up under the seat in the train car. The officials called GEMS
and asked if they could bring her here, so they did. She arrived last
night. You’ve got to go see her, I just held her in my arms.” 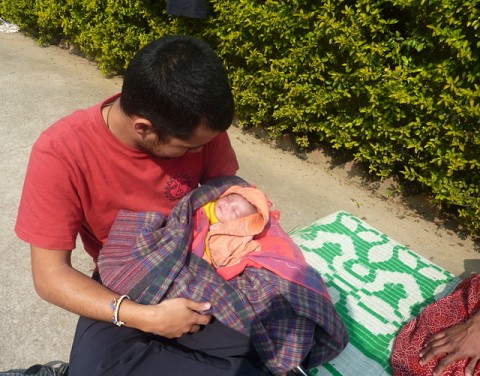 I
soon walked downstairs to the garden where Indian ladies were holding
and feeding her. I held her in my arms. My heart had so many emotions in
that moment: sadness, joy, and hope. Hope was what I prayed over her.
God has a future and a hope for her. She miraculously was brought to a
wonderful christian community in the middle of Hindu India. She was
miraculously put in the arms of loving ladies. And she will miraculously
already be adopted by southern Indians who will raise her in a home
that loves Jesus.

If
I had the influence or say, I would name her Hope. Because God has a
hope for her life. She was destined for abandonment, loneliness, or even
death. The possibilities of how horrible this situation could have turned
out is almost unthinkable. Given the situation in this part of India
where in these villages sex trafficking is a huge problem. But God’s
grace brought her here. I don’t know why not every story turns out like
this. I am not God. But my heart is pouring over with joy and
satisfaction in the love and grace of God that saved this unnamed but
specially created 7 day old baby found under the seat of a train headed
to nowhere. Now, she is headed somewhere!