Every now and then I read a blog that just wrecks me and haunts me. Here’s one from Stephanie Fisk, whose heart is breaking as she touches the broken around the world in this year of self-discovery and journeying in God. See if you can read it without being moved.When we arrived at the orphanag…
By Seth Barnes
16 October 2007, 12:10 am
By Seth Barnes
16 October 2007, 12:10 am 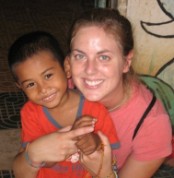 Every now and then I read a blog that just wrecks me and haunts me. Here’s one from Stephanie Fisk, whose heart is breaking as she touches the broken around the world in this year of self-discovery and journeying in God. See if you can read it without being moved.

When we arrived at the orphanage this morning, everything was normal…

We pull up in our tuk-tuk and are greeted by a mob of eager kids. A
couple of the younger boys begin climbing up onto our laps before we
have a chance to step out of our tuk-tuk. My arms are pulled in
opposite directions as another kid beelines for a hug and grabs my
belly. “Hello’s” and “Mammy’s” echo throughout the greeting fest.

A few photos and rounds of hand clap games later, and I am pulled
back into their ‘multipurpose room” – classroom, bedrooms, dining room,
play room, wash room, etc. Today, I pull out a blank piece of paper and
my stop watch. They love to time themselves and see who can say their
ABC’s the quickest. I think that 3.57 second was the winning time
today. Some of the older boys split with my stop watch and the younger
children crowd around as we pull out more paper and crayons. Still, in
the midst of the chaos, nothing is out of the ordinary. 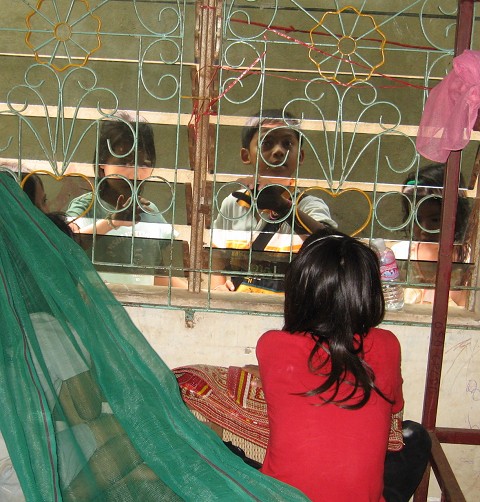 I excused myself, and walk to the baby room. It is there that I see
two of the older girls sitting on the bed facing the window. I walk up
to them, and notice that they are crying. Something’s up, I think to
myself. Are these girls being punished?

Just then one of the caretakers walks up to me, points to the tears,
and then waves goodbye. Chantear (sounds like Gentil), my favorite
girl, is leaving? This can’t be true. I reply – playing the same hand
gesture game to try to understand a bit more. She waves good bye again.
My heart begins to sink. Yes, someone is definitely leaving.

I bend over and gently whisper into Chantear’s ear, “Are you
alright? Are you going somewhere today?” She shakes her head no, stands
up and walks outside. I follow her. Outside children are beginning to
gather. They look lost; like they do not really know what to do. Tears
begin to fall down their little cheeks. There is a black truck parked
in the front. The back door is open. I walk up to it and peer in. I
count the back packs. Six back packs. Wait a second. What is going on
here? 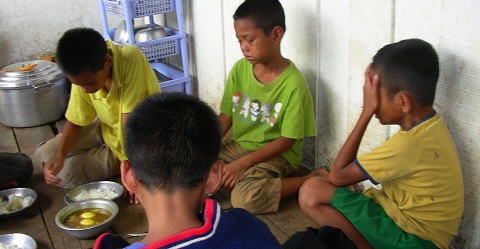 I walk back to the “multipurpose” room and notice that coloring has
been abandoned. Six boys – four around 13 years old and two about 7 –
are eating rice with some curry. They take a bit between their sobs.
Red eyed children – friends, brothers and sisters – are standing around
them. Children reaching for one another, trying to console the pain.

Due to overcrowding, today 6 of the boys are being moved to another
orphanage 3 hours away. They found out yesterday. Once again they are
leaving everything they know. Everything that has become familiar to
them. Their bed, their home…their family. Once again they are losing
their friends and family. I do not know specifically who was abandoned
by their parents and who lost their parents due to death. But they know
loss either way. I cannot even begin to understand the sorrow that they
have experienced in their short life here on earth. 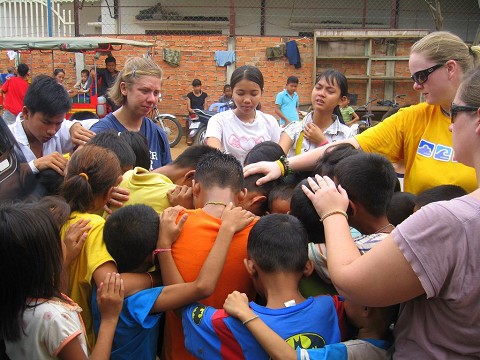 The majority of the kids gather beside the truck. It’s time to pray.
The prayer immediately turns into morning. Kids grasp one another as
tears stream down their dirty cheeks. Some kids weep, but no tears
fall. Their well has run dry. I have heard children cry before. But I
have never heard the tearless wail of children who are once again – for
the second or third time – losing their family.

I felt like I was eavesdropping on a sacred ceremony. 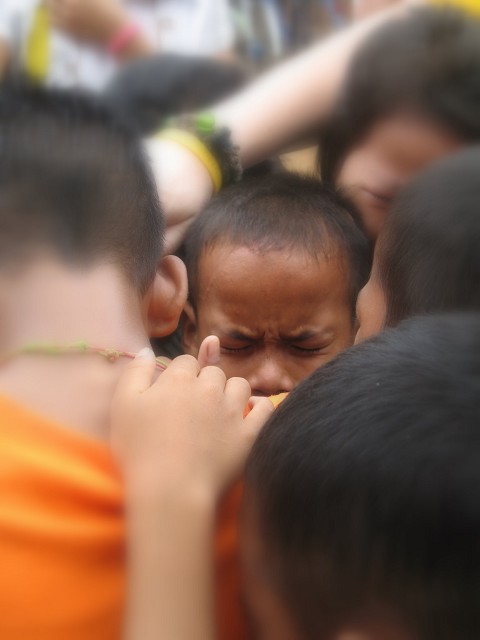 Jesus wept. I felt like Jesus was weeping on my shoulder this morning.

I too felt the loss.

These were six of my boys. They had ridden the water slide with me,
colored me pictures and made me bracelets. They had taught me their
secret hand shake and blessed my soul with their smiles, songs and
laughter. They had captured my love just like all the others.

After just three weeks with them it hurt to say good bye.

After spending years growing up together, I can’t even imagine…