Our puppy finds a home

Those of you who follow me on Facebook know all about our adventures with a certain Boxer-Lab puppy that our daughters brought home a few weeks ago. Saying goodbye to Abby at the beginning of the summer was tough, but were we ready to start over again?   The puppy was wonderfully playful,…
By Seth Barnes
08 September 2009, 12:09 am
By Seth Barnes
08 September 2009, 12:09 am 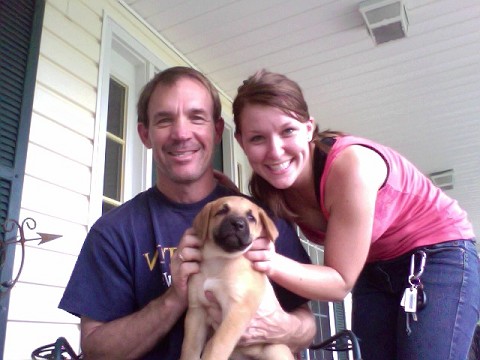 Those of you who follow me on Facebook know all about our adventures with a certain Boxer-Lab puppy that our daughters brought home a few weeks ago. Saying goodbye to Abby at the beginning of the summer was tough, but were we ready to start over again?
The puppy was wonderfully playful, but yappy and needy. We’d wake up in the morning and the poor little guy would be hoarse from barking all night. Within a week, we knew it wasn’t going to work. He needed more than we could give.
Really what the puppy needed was a boy to play with. He needed regular attention – someone who loves to romp and throw balls in a back yard. We prayed and then posted him on Craigs List. After an initial misfire with someone who responded but later backed out, Laura called us up, excited and ready to come right over. She had an 11 year-old boy named Shane who was heartbroken from losing his dog the week before. We said, “Great, you can have her with just one condition – you have to share the story so we can share it on the blog.”
Laura agreed and yesterday sent me the story. Here it is:

Our son had just turned four years old and wanted a puppy. We looked and searched for a few weeks until we found George.  The people we got him from had several Labrador puppies available.
I wanted the chocolate Lab, but Shane (our son) wanted the black one. So he came home with us that day.  Shane named him “George” because he was so goofy.
We had a wonderful life with George and he with us; he slept in our beds and just completed our family.
Then one day he found out that he was born with hip dysplasia. We started him on several medicines that worked great for him.  Then we came home one day and he could not walk, so we rushed him to the vet to find out that he had degenerate disc disease and we would be lucky if we got another year out of him before he would not be able to walk.
George got to the point where he could no longer walk well and his quality of life was going down hill fast.  He developed Cushings disease as a result of the long term steroid use and had injured his tendons in his back leg as well.  We ended up having to put him down. It was the hardest thing we have ever had to do, it was like losing a child!
I know George is in a better place now and no longer in pain.  We realized how quiet our home was and how lonely we were and I started looking on line for a new puppy.  We found “Marley” on Craigslist in Gainsville – she is an absolute joy. She truly lives up to her name – she is so smart and full of love and energy!  We are truly blessed to have her in our family.
My son just loves her to pieces. We live in the Cardinal Lake community which has a lake and a beach and Marley is having a blast digging in the sand and chasing her toys and kids on the beach. Mr. Barnes thank you so much for her she has truly been a blessing to us.