Parents who don’t disciple their kids

At AIM, we help young people follow Jesus as he intended, whether for a month or for a year, or sometimes more. It means stretching them in a hundred different ways in an effort to help them grow up. The church calls the process “discipleship” (a tired term that needs invigoration). Regardless…
By Seth Barnes
01 February 2008, 12:02 am
By Seth Barnes
01 February 2008, 12:02 am

At AIM, we help young people
follow Jesus as he intended, whether for a month or for a year, or sometimes
more. 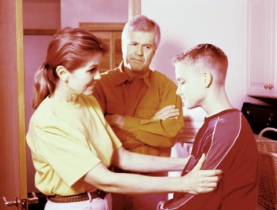 It means stretching them in a
hundred different ways in an effort to help them grow up. The church calls the process “discipleship” (a tired term that needs invigoration).

Regardless of what we call it, discipleship as Jesus did it doesn’t happen much in the church any more. Instead, churches substitute programs and activities that coddle young people, doing little to move them to greatness or even wake them up to supernatural reality.

I saw this happening with my own kids and I realized that I couldn’t delegate discipleship to anyone else – if I didn’t do it, it wasn’t going to happen. And even though I gave it my best shot, I missed so much (for example, my 23 year-old son called me up from Africa yesterday to say, “why didn’t you ever teach about things like covenant?).”

Here’s where many parents miss the boat: discipling is a process that usually is attended
by pain and discomfort – things that parents work hard to protect their
children from all their lives. They seem blind to the fact that their kids will never get to greatness without diving headlong into uncomfortable, stressful, ambiguous situations. And because of that, many parents are at odds with discipling ministries like AIM right
off the bat.

We AIM-types want to respect parents
and their investment, but if we are going to have a shot at discipling their kids as Jesus did, we need for them to respect us and empower us. When the distressed phone calls to mom and dad back at the homestead go out, many parents struggle with the angst of letting go – they’ve had the steering wheel so long, they want to keep on backseat driving.

Some of them call or write me to ask detailed
questions about what’s going on with their kid.
Many want to get a regular phone call update from them – something we discourage as it keeps young people stuck and unable to grow. These parents have got elastic apron strings that
sometimes stretch as far as Africa. It’s exhausting for us. Sometimes I just want to refuse to take any young person whose parents can’t prove that they really get this point. It’s a fool’s errand to try and fight them. I want to tell them, “Hey, you did such a great job with your kiddo –
why don’t we send them back home to you so you can have another whirl
at it?”

And the whole thing becomes really complicated when the logistics on the mission field get fouled up and it appears to the overanxious parent like AIM isn’t doing its job. At times like that, I just want to quit this ministry and go disciple African youth instead. Hey, in Swaziland they’re lucky to even have parents!

Raising radicals is dangerous work. It’s got to be uncomfortable and even downright painful if its ever going to happen. And when you’re doing the stuff Jesus did – like confronting demons (see Eric Hanson’s blog from Mozambique) – when a young person’s issues get in the way (or perhaps their theology is exposed as threadbare or impractical), you see the fruit of parents who have been trying to do discipleship on the cheap.