Two coworkers embark on a trip of faith 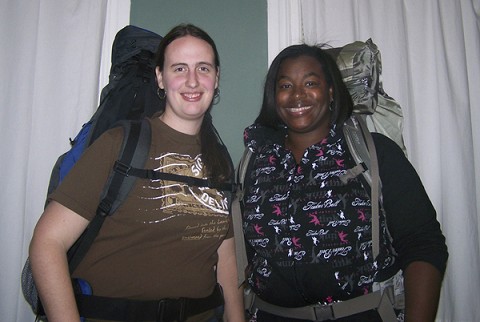 Two traveling buddies, one frugal and one five-star, have temporarily
laid down their jobs for a world race they hope will be Mission: Amazing.

Erica Talley of Overbrook and Samantha McCowan of Media will travel
to 11 countries in 11 months. They will blend missionary work with a
little dose of adventure, reminiscent of a popular reality television
show.

Talley and McCowan leave today for the World Race, a program in
which teams of missionaries, typically ages 21 to 35, travel around the
world doing month-long mission projects. Also on the itinerary are
periodic competitions among the teams, a la reality show The Amazing Race – a scavenger hunt in Peru one month, a race to Mozambique another.

“The year is intense. Our participants are constantly being
challenged,” said World Race cofounder and executive Seth Barnes. “We
want to give them the chance for a little fun along the way.”

The World Race, based in Gainesville, Ga., has drawn 200
participants since it was founded in 2005. The program is a division of
Adventures in Mission, an interdenominational group that offers
opportunities around the world. Participants visit countries such as
Vietnam, Thailand, Bosnia, South Africa and Haiti for a month each to
build homes, teach English and evangelize – with a little fun and
adventure thrown in.

Talley, 27, and McCowan, 24, are procurement agents at the Boeing
Co. in Ridley Park, where they buy helicopter parts. They became
friends because they were the youngest people in their pod area.

The two – who have created their own celebrity nickname, “Samerica”
– often travel together. They’ve “eaten their way” through Montreal and
Quebec and driven through New York state on fall foliage weekends.

They were reluctant to add a missionary trip to their journeys.

“I’m the one who’s always trying to find the spa,” said Talley, a Central High School graduate. “That’s why I told God: No.”

The refusal came in response to what Talley believed were divinely
inspired hints that her participation in the World Race was a fait
accompli. So what if she dreamed about it, or happened to meet a guy
whose parents were missionaries in Thailand (one of the stops on the
race)? The trip wasn’t for her as long as it involved sleeping bags,
tents, showers under a hose, and bad-hair weather.

“The ad said, ‘Camping.’ I said, ‘This will be good for Samantha –
because black people don’t camp,’ ” said Talley, who is African
American. McCowan is white.

But black had nothing to do with it for McCowan, who had her own doubts.

“At first I thought the whole thing was crazy,” she said, “because I didn’t want to sleep on the ground for a year.”

Both women, who were raised in the church and had found a bond of
friendship in their faith life, decided to pray about the opportunity.
When they did, they found their arguments for not going were trumped by
a desire to do good and a belief that they were destined to go.

Leaves of absence came easily, and friends and family have helped
them in their efforts to raise the $13,800 that each needs to
participate; Talley still has several thousand left to go.

“I’m excited to see where this will take me,” McCowan said. The two friends will be on opposing teams during the mission.

They are embarking as short-term missions of weeks and months have
flooded the mission-field landscape, partially eclipsing the
traditional career missionaries who dedicate years to one place.

About two million people each year participate in a mission trip of
weeks or months, said Robert J. Priest, a professor of mission and
intercultural studies at the Trinity Evangelical Divinity School in
Deerfield, Ill.

Short-term missions are an outgrowth of efforts by churches,
schools and agencies to use the trips as a tool of spiritual and
personal growth, primarily for youth groups. Much of the money that
once supported career missionaries now goes to efforts to give a
church’s young people a taste of mission life, Priest said.

To combat such criticism, cofounder Barnes has tried to craft the
World Race around extensive training of participants on cultural
differences, simple living once overseas (camping, hostels, churches),
and support for missionary work already underway in the local community.

When Talley and McCowan board the plane today, they will be part of
a group of 53 with backpacks, tents and six vaccinations each. Among
those joining them are a teacher, a doctor, an architect and a pastry
chef.

According to Sarah Burrows, 24, of Wilmington, who returned in July
from a World Race trip, leaving each place will be difficult.

Burrows worked in orphanages, built sidewalks, and – in Amazing Race-style – participated in a scavenger hunt around Bangkok.

“They’ll find out that they can have an impact on the world by
having individual relationships with individual people,” Burrows said.

Somewhere in the back of her mind, Talley’s mother knows that –
even though she begged, pleaded and threatened in a fearful parent’s
attempt to get her only child to reconsider.