Picking through the rubble of your shattered life

Yesterday, with a team of Racers in tow, I talked to people in the town in Peru that had been decimated by the earthquake that hit five months ago. It has profoundly impacted  our team. Here’s a blog by one of them, Kim Daniels: Today I walked among the rubble and remains of people’s l…
By Seth Barnes
12 January 2008, 12:01 am
By Seth Barnes
12 January 2008, 12:01 am

Yesterday, with a team of Racers in tow, I talked to people in the town in Peru that had been decimated by the earthquake that hit five months ago. It has profoundly impacted  our team. Here’s a blog by one of them, Kim Daniels:

Today I walked among the rubble and remains of people’s lives.

I held a 2 year old baby on my hip, the hand of a 10 year old girl on my left, and the hand of a 6 year old girl on my right, as we made our way over heaps of concrete and debris. They wanted to show me where their room used to be. They pointed out their kitchen, which is now nothing more than broken brick scattered in a heap. They showed me their living room where they used to set up their Christmas tree. They pointed out the town square where there used to be “grand parades”, but now is just a collection of trash and ruins.

We filled a bus full of the people from the town of Tambo De Mora, aging from 1 to 87, to take us to what is left of what their homes. Two days earlier I had walked these same grounds without the families, and while I could not deny the physical devastation, it didn’t really sink into me. I’ve seen footage of Katrina damage. I’ve been to the sites of California earthquake remains. I’ve seen the movie Independence Day.

But then I looked into their eyes and heard their stories as we stumbled around the piles of concrete and questions. 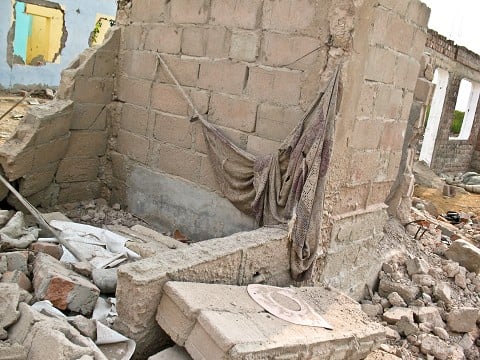 ~~
Hundreds of millions of dollars have been donated to the relief efforts of the people here in Chincha. Non-profit organizations have helped financially, as well as the artist Shakira, who reportedly has given 40 million dollars.

And yet, the people of Tambo de Mora have not seen one bit of that money.

Instead, many live in houses made of one wood wall in the front, and plastic walls throughout the inside. They are mosquito infested, and the children are sick from the bites with no money for medication.

Most people are living on private property in make-shift shacks in living conditions that would make any North American cringe. Garbage is all around the streets. The outhouses are overflowing, and the stench fills the village. When we first got there, there was a feeling of oppression on the place, and a spirit of hopelessness. These people have gotten used to the feeling of nobody caring for them or rising up to defend them. They feel voiceless. Faceless. Defenseless.

Chincha used to be a beautiful and prosperous town. Most worked in the fishing industry, as the city is right on the coast. The homes were painted in bright colors and filled with hard-earned comforts to enjoy with family and friends.

My friend Aldolfo built his home 45 years ago with his own two hands. He is now 87 years old, with a wife, 12 kids, and 33 grandchildren, three of which were my tour guides amongst the rubble. When I stepped off the bus, his eyes filled with tears as he embraced me with the kind of hug that digs fingernails into your back, and with broken sentences he told me of how thankful he was that we had come.

Because he doesn’t feel like his government cares. Because he feels somewhat alone. Because no one is listening to the needs of these people. 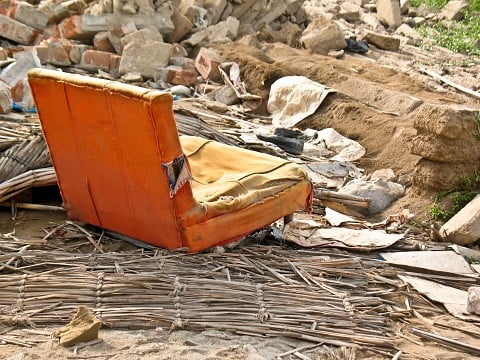 And so with one baby clinging to my neck, two children attached to my hip and 7 more following behind, I walked by Aldolfo and his wife through their demolished home. And then, we walked down the street to hear the stories of 20 other families in the neighborhood.

Some lost husbands, wives, parents, and children, and I can only imagine the horrors of finding them crushed beneath the wreckage, or watching a wall fall on them from behind. I can only imagine the sounds of that night… the deep, bass rumble, the sound of windows shattering, dogs barking, children crying, men and women screaming, weeping and wailing… and then the thickness of the silence the next day. I can only imagine the atmosphere as they laid the bodies of their dead in the middle of the town square.

And now, 5 months later, after the initial grievers have left and the “sorry for your loss” cards have ceased, the people of Tambo De Mora are still living in boxes, without enough food and water, and in conditions that are below the acceptable line for humanity.

But why? When hundreds of MILLIONS of dollars of have been donated? Where is that money?

We are here for the next 3 weeks, and the story and ministry is just unfolding. Today, a small group of us went to talk with the Mayor of Tambo Del Mora (how we got an appointment was only God’s doing) to find out where the breakdown of funds has happened. Expect to hear from me soon…. but in the meantime, please pray for favor as we dig into this. The Lord’s heart breaks for these people, even more than our’s do.