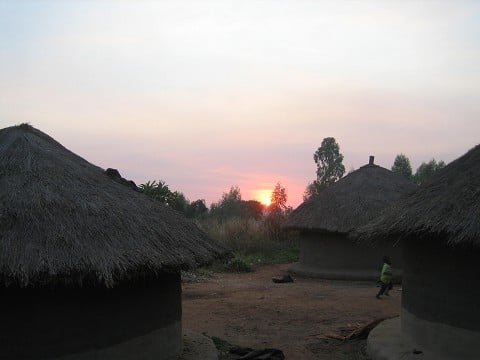 Do you believe that when Jesus told his disciples, “As you go…heal the sick, raise the dead,” he was serious?
We do. When we send out World Racers, we instruct them as Jesus instructed his disciples in Matt. 10 before he sent them out.
From Jinja, Uganda yesterday, comes the report a situation where it actually happened. Marissa Villa shares the story:

As Matt and Dan rode towards the town of Jinja on the back of the boda
bodas, they saw a man surrounded by a group of people, laying on the
ground to the left of the road.  As the bodas slowed, the man, who was
covered in blood, came to his feet. He’d obviously been hit by a car or
thrown off of a boda, but seemed OK. The drivers kept moving.

As the boda bodas came around a slight bend in the road, Matt and Dan
noticed a motorcycle laying there. Its pieces were strewn across the
road. As the bodas slowed, a young girl of about 7 years old came into
view. She was wearing a pink dress and her face and arms were covered
in blood, but she at least was standing.

But just past her, a group of about 15 people were surrounding
something else on the road. The boda bodas stopped in front of the
group and a small boy, also about 7 years old, came into view. His body
was laying in the middle of the road.

A man shaked the boy, trying to bring him back to life, but he lay limp.

Dan and Matt pushed through the crowd to get to the boy who had a four
inch bleeding bulge on his forehead. His mouth and ear was spilling
blood.

Matt prayed as Dan looked around for a ride to get the boy to the
hospital.

It was then that Austin arrived on another boda boda that was coming
from the other direction. Austin jumped off of the motorcycle and
immediately ran to the boy.

Dan told Austin that someone in the crowd was willing to take the boy
to the hospital. The two of them and another man carried the lifeless
boy’s body to the car.

“Do you feel a pulse or see him breathing?” Dan asked Austin.

Austin stopped his prayer mid-sentence, looked up, and simply responded,
“No.”

As they lay the boy in the backseat of the car, Austin pulled his
sweatshirt off and put it under the boy’s head. As he did this, the
boy’s chest started to rise and fall.

Afterward, Matt said, “Once we pulled up I was scared, shocked, and felt useless. I was
looking at a lifeless child. A million things started to create a wall
in my mind. Then God busted through all of the feelings and said, ‘hold
on, I’m bigger than that… pray.’ So, I did.”

Read about it here. And in the follow-up blog.