Ramseys shows us his pain

A man named Ramseys recently took a group of us to his home that was
destroyed in the quake. We walked into the enclosed area with the
mountain of rubble that was his home and glanced around at bits of
furniture, walls, doors and other things that piled up on the ground. 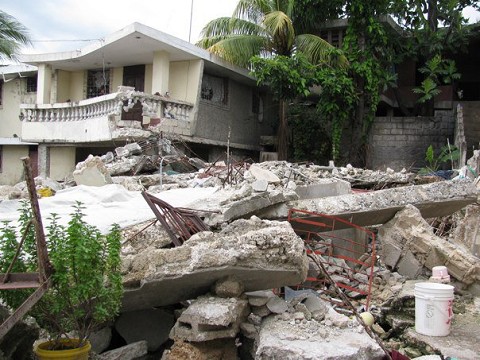 I envisioned what it must have been like, as
the ground started to shake. She probably grabbed her son and didn’t
know what to do but hold him close. It wasn’t long before the house
collapsed around them. And as it did, she shielded her son with her own
body.

“How do you do it?” one of the girls on the team asked
Ramsey through tears. “How do you continue to follow God?”

I
don’t remember all that he said, but one thing did stick with me. “This
is life.”

This man gets
brokenness and death as a huge part of life that most of us don’t.

I’ve
been realizing more and more recently how broken humanity is. The
reality I grew up with in America shows me that darkness in my society
is covered and hidden deep within. It’s kept hidden in our injured
hearts by clever wit, snippy sass, passive aggression and sarcasm that
cuts at people’s insecurities. Somehow we feel better by putting others
down. Here’s a phrase I like, “Hurt people hurt people.”

We’re
all human, though, injured by the humanity of others. We may be trying
to recover, but too afraid of being hurt again to trust another. Some
may hurt us, but I know a good amount of people who thrive on bringing
life and inner healing to others.

I challenge you to be
vulnerable. Find a safe, trustworthy person and talk about the pain
that’s hard to even mention. There is strength and healing on the other
side of pain, a light at the end of the tunnel.