Recovering the lost gift of dancing

What are some of the things that make God smile? I think he smiles when he sees a family
laughing together, or a mother gazing into the eyes of her baby, or a dad
tickling his child, or a young couple falling in love, or a group of his people
worshiping in dance. 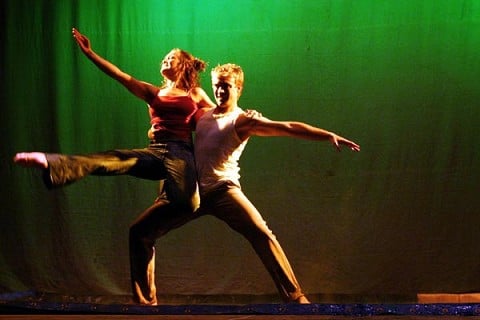 But somehow the last item on this list is one we
rarely see in our church gatherings.
Somehow our puritanical roots, in reaction to a world at odds with the
things of God, tilted toward legalism, choked off this gift of God that makes
him smile.

Yes, dancing is associated with people drinking too
much and doing the sad , destructive things that people do when they have no
self-control. Anything taken to an
extreme can be harmful. But if a party
that’s gotten out-of-hand is wrong, so is a life lived without the God-pleasing
frills of celebration and exuberance.

Dancing is one of those gifts that, like art itself,
has an edge to it. God gave us judgment
and free will in order that we might enjoy his gifts that have this edge. Think of the gift of relationships; conflict
and broken trust are an inevitable aspect of relationship, but so are love and
commitment. Or think of the gifts of sex
or alcohol. They can produce great joy
or incredible pain.

25 years ago in the D.R., Karen and I learned to
dance. The Dominican people have a
national dance called meringue, all shuffling feet and swinging elbows. It’s as Caribbean as steel drums and hits
your spirit like the sun rising over one of its white, sandy beaches.

In the charismatic churches of Latin
America, I discovered something spiritual in the banner-waving
dancers who gave physical expression to the joy of the Lord. In the early 90’s my own five small children
thrilled to the jive of Midnight Oil’s ‘Blue Sky Mining’ while hanging on my
back and legs. Later in 2002 we visited
one Peruvian church that had discovered the sacramental aspects of dancing and
capped its worship services with a wonderfully kinetic Latin version of a
hoe-down.

Last year my daughter Emily joined a South African
dance and drama troupe that so captured my imagination, I felt God saying, ‘Help bring that ministry to a Church in America that has forgotten how to
dance.’

Something about the arts has the power to unlock
windows to the soul. Dance being a
subset of the arts has the power to do that.
As an example, take the deeply traumatized young people of New Orleans. This past week, the dance ministry we started
(called 13th Floor) reached into the spirits of hundreds of
students who came forward for prayer.
140 of them gave their lives to Christ.

How does the evangelical church recover this gift
which lights up our soul and causes us to shine in ways that make God’s eyes
sparkle? For one thing, we need to move
beyond theological repentance to throwing a few dances. When I attended Wheaton College,
dancing was verboten. Thankfully a few
years ago, the institution repented of its wet blanket attitude and abolished
the policy.

A lot of churches may not have such a policy in place,
but would be scandalized by the idea of scheduling a dance. They need to get over their bad selves and
join the 20th century. We’re
losing two million a year from evangelical churches in part because of this
head-in-the-sand approach to culture. We
need to rediscover our bodies as tools of worship.

The children of Isaiah danced the horah and have
passed it down as a part of their heritage to this day. We American Jesus followers need to discover
our dance too.