Kayla Zilch and her World Race squad just launched from Atlanta two days ago. They flew right into the middle of the refugee crisis. She filed this report: At some point around 3 in the morning, I was woken up to my sleeping pad being stepped on, and I peeked out from underneath my sleeping ba…
By Seth Barnes
11 September 2015, 12:09 am
By Seth Barnes
11 September 2015, 12:09 am 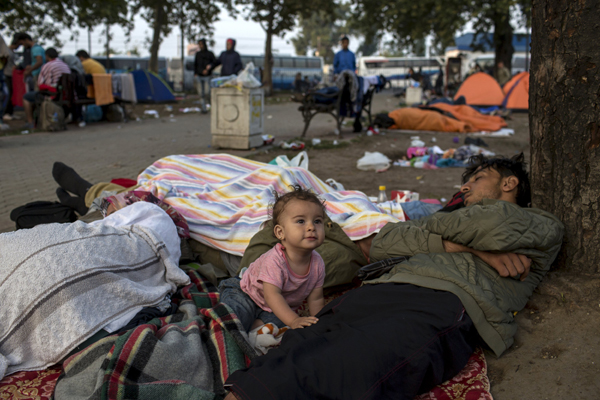 Kayla Zilch and her World Race squad just launched from Atlanta two days ago. They flew right into the middle of the refugee crisis. She filed this report:

At some point around 3 in the morning, I was woken up to my sleeping pad being stepped on, and I peeked out from underneath my sleeping bag hood to see a little boy, maybe three years old, chasing a small yellow ball as his mother, sister and father all spread out old blankets and garbage bags at my feet.

For a few seconds, I was confused – why were there two little kids wide awake at a Serbian bus overhang at three in the morning? Also, when had it gotten so loud?!

Sliding out of my bag and pushing the dirty hair away from my face, I got up and looked around – and I was shocked. Hundreds of men, women and children were either in the process of setting up or had set up temporary shelters for themselves all around the bus station.

Some were huddled in doorways, some piled in corners with their babies tucked under their arms, children periodically waking up and crying from the cold and the bright lights. All were poorly draped in tattered blankets and muddy clothing, most of it the wrong size for whoever was wearing it.

Refugees, as far as the eye could see. And some were sleeping right at my feet.

That’s around the time that we met Yosialah, a woman in her late thirties who initially wandered over to us from a different corner of the station in search of extra blankets.

After giving her two, my teammates Tabitha and Heather then beckoned her to come share a sleeping bag with us. After some hesitation, Yosialah agreed – she scooted in close, pulled the bag up over her knees, and told us her story.

“I was in Syria,” she explained through broken (but generally pretty great) English. “I lost my brother, my uncle, to the war. To ISIS. My house – my house is all gone. It’s gone, destroyed. Flat.”

She took a deep drag from the cigarette in her right hand, expelling a long-held breath as some gray tobacco ash caught the wind, settling delicately into Heather’s hair.

“I was a teacher, and I hope to do two, maybe three years in Germany. But for us, for me – no one wants us! No hotels. They say, “We are all full.” We have nowhere to go! All I do is try and find work to feed my children. I can’t go home.”

Until about an hour ago I legitimately had no idea what day it was.

But here’s what I do know: there is a LOT to be done here in Europe. The faces and bodies you see so impersonally in the news and on National Geographic are real – real people who get cold, who are hungry, who have family that they love.

Real people sleeping in public bus stations, eating Spam out of cans with their fingers, searching for extra blankets for their kids. They’re real, and 12 hours ago, they were sleeping all around us.

Please pray for the work that God has for our little team of women to do here in Serbia. We arrived after a seven hour bus trip this morning in Negotin, at a small ground-level flat where we will be living and working alongside our host partners.

We are all jet-lagged within an inch of our lives but that’s alright, because this single-room flat is perfect; and somewhere along the lines of working to build local small groups, dodging watermelon-size pigeons and living on top of one another for the next month, we’re gonna become family.