Rest of the story: St. Francis lives down the street from me 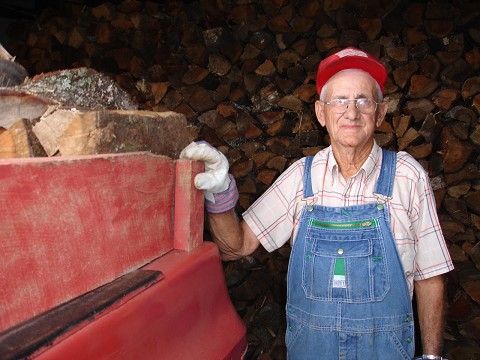 Robert Wetherford is 78 years old and works harder chopping wood than most men half his age. This morning I was jogging by his wood-splitting operation for the thousandth time and I felt the Lord wanted me to go back and get his picture and listen to his story. Robert was loading wood in his old truck. When he stopped and turned around, I could see he was chewing tobacco and periodically throughout our conversation, he would pause to spit.

Although we wave “hello” to one another all the time, I needed to introduce myself. He’s a simple man, who doesn’t read or write. He loves his children and grandchildren, who call him “Pop Pop.” He began sharing with me what God wanted me to hear without any prompting.

“I used to work for $1.25 an hour for 18 years. Then I got a job working for $4/hour. The only problem was that I only saw my family on the weekends. I was driving along towards Athens one morning when I heard a voice say, ‘Robert.’

‘There ain’t nobody riding with me,’ he replied.

‘I ride with you all the time,” said the voice, and Robert knew it was the Lord.

‘You need to quit your job and come home with your boy,’ the Lord said, ‘If you make a million dollars and it takes a million to get him out of prison, what have you made?’

‘If you quit, you’ll having nothing, but you’ll have Troy.’

All week long, Robert was awed and frightened by his conversation with the Almighty. But that night, he went home, and his seven year-old son Troy was saved. That weekend, Robert quit his job. He knew that he’d be poor, but he’d be happy, and he knew he needed to live for God.

Later, he and Troy were sitting together and a truck drove up pulling a boat. A man got out and gave them some fish. Troy said, “Why can’t we get a boat like that?” Robert had committed to living simply and they didn’t have any money. But God showed him how he could get a boat and provided the money. He says, “Lots of preachers say, ‘the Lord don’t talk,’ but I know he does! I can prove it!”

“I’ve been healed three times. Once I fell and crushed some vertebrae in my back. The doctors told me, ‘you’ll never work again.’ All I could do was lie in bed. One Saturday night I was laying there and the Lord woke me up, ‘Robert,’ he said.

“I knew that he was healing me. When I woke up the next day, I was healed. I went to church and the people asked me, ‘Where did you go to get healed?’

I told them, ‘I was saved at home and I was healed at home.’

My parents were so proud. They shouted and said, ‘we knew you wouldn’t give up!’

“Later, while working as a mechanic, my hand turned black and they told me I needed to quit. The Lord said, ‘try wood.’

Postscript 3 years later: June 16, 2009 Robert passes away. His family, though mourning, remembers all his many kindnesses like giving the grandchildren candy.