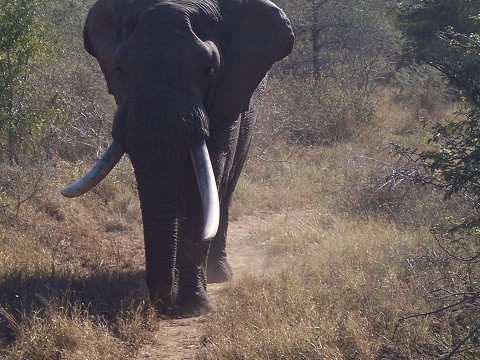 Elephants are social creatures with defined roles for everyone in the herd.

The herd is matriarchal, dominated by mothers and aunties. When the male babies grow to adolescence, they are kicked out of the herd, leaving their sisters and mother behind.

We saw several of these lonely guys roaming around in the African bush today. They form bachelor herds that hang out together and wait for female elephants to go into heat.

Like most teenagers, they are relatively harmless, ripping up bushes and pushing down trees as a way of showing off to one another. But occasionally one of them will go rogue. Some social gene in their brain fails to kick in and they run amok, creating havoc.

The usual remedy for a rogue elephant is to shoot it. Left to their own devices, they’ll destroy things and corrupt their peers. One creative solution for a bachelor herd that has been corrupted by a rogue is to bus in an elephant mother. Inevitably, the mother reestablishes order in the herd.

As I reflect on the state of the American teenager hanging out in herds that roam our nation’s malls and sneer at their elders, it seems to me that a good solution might be to parachute in a few mothers to reestablish order.