Sean Taylor, all-pro safety for the Washington Redskins, died a few minutes ago. A man broke into his home yesterday and shot him. He was 24 and leaves behind a fiancé, a baby daughter, and a lot of broken-hearted fans, myself included. I’ve been a Redskins fan for about two decades now, since …
By Seth Barnes
27 November 2007, 12:11 am
By Seth Barnes
27 November 2007, 12:11 am 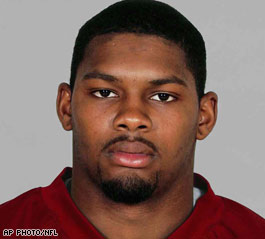 Sean Taylor, all-pro safety for the Washington Redskins, died a few minutes ago. A man broke into his home yesterday and shot him. He was 24 and leaves behind a fiancé, a baby daughter, and a lot of broken-hearted fans, myself included.

I’ve been a Redskins fan for about two decades now, since the era when they were Super Bowl champions. It’s been hard to be a fan lately, but Taylor was one reason to cheer. Considered by many to be the hardest hitter in football, he was unnaturally talented.

Taylor came from a troubled background, narrowly avoiding a prison sentence for a court case a year ago. But he bounced back and was leading the league in interceptions this year. The Washington coaches believed in him even when others didn’t. The defensive coach, Greg Williams, treated him like a son.

I haven’t figured out what needs to be said here. It’s just so appalling to me – so senseless that this should happen that I felt something should be said.

I want to say something about my dreams. I don’t have many hobbies, but my passion for the Redskins is one. During the off-season, I follow their player acquisitions. I memorize their stats and strategies. It gets a little obsessive.

Taylor’s death forces perspective. For too many of us, especially those of us who are guys, sports takes on too high a priority. Life is fragile. For example, I just learned that the number of orphans in Swaziland just jumped by nearly 50% this past year.

Every day, tragedies like Taylor’s are happening over there without any attendant newspaper stories. It’s a crazy world, made crazier when we get our priorities out of whack. I’m going to take a fresh look at mine.
I write about taking revenge in this blog a week later…