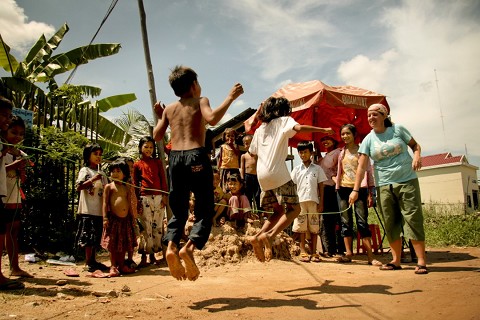 Christians
of all ages are fueling a growing trend in U.S. missions where families
and individuals use their vacation time to go on short-term mission
trips, which some dub “vacations with a purpose.”

Many of the participants are young adult students who make the trip
during spring break or summer vacation. Another large segment of
volunteers are retirees who offer their professional skills to support
missionaries overseas.

It is estimated that millions of American
Christians participate in short-term mission trips each year, with some
1.6 million believers contributing in labor worth about $6 billion,
according to Wycliffe Associates, a mission group that organizes
volunteers to support the work of Bible translators.

Bruce Smith,
president and chief executive officer of Wycliffe Associates, in a
recent update said the ministry is completing a new Volunteer
Mobilization Center in Orlando that will be used to prepare thousands
of volunteers heading out on short-term missions.

“Designed and
built primarily by volunteers, the center will service a growing tide
of American’s seeking to use their free time more productively,” Smith
said in a statement.

By no means is
short-term mission a new concept, but it has gained great attention in
recent years because of its phenomenal growth in popularity.

Studies
show that in 1965 there were only about 540 individuals from North
America involved in short-term mission, according to Roger Peterson,
president of STEM International (Short Term Evangelical Missions), in
his essay “What’s Happening in Short-term Mission?”

Doug Cutchins, co-author of the book Volunteer Vacations: Short-term Adventures That Will Benefit You and Others,
explained that the Sept. 11, 2001, terrorist attacks brought greater
interest to this type of short-term, purpose-driven vacation.

In
2004, it was the tsunami disaster that devastated parts of Indonesia
and Thailand that sparked huge participation in this type of
service-oriented tourism.

But some mission leaders have raised
concerns about the effectiveness of short-term missions to the purpose
of advancing God’s kingdom.

Preeminent missiologist Dr. Ralph D. Winter,
founder of the U.S. Center for World Mission, said short-termers do not
have much impact on missions, but can benefit personally in faith from
the experience.

Last year, Winter listed short-term missions as
one of the 12 past mistakes made by Western mission agencies that Asian
missiologists should avoid during a presentation at the Asian Society
of Missiology conference in Bangkok.

He specifically criticized
churches that send every family in the congregation overseas for a
two-week project. Winter called it a “marvelous idea” to educate people
about foreign lands, but “incredibly expensive” and “very questionable”
in its contribution to the cause of missions.