I’m headed home from Florida, will meet my board at the airport in Atlanta for our semi-annual meeting. It’s going to be a low-key, quick meeting. The AIM board is great – the members give selflessly of themselves to further our vision of discipleship through missions.In an earlier blog, I com…
By Seth Barnes
13 April 2008, 12:04 am
By Seth Barnes
13 April 2008, 12:04 am

I’m headed home from Florida, will meet my board at the airport in Atlanta for our semi-annual meeting. It’s going to be a low-key, quick meeting. The AIM board is great – the members give selflessly of themselves to further our vision of discipleship through missions.

In an
earlier blog, I commented on the worst short-term mission trip idea I’d
heard of – a
missions cruise. 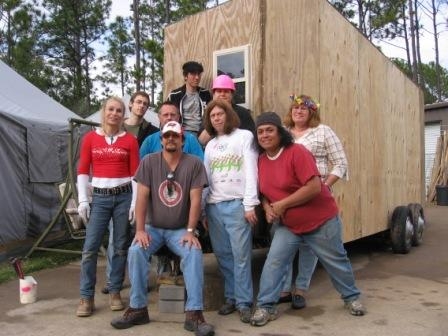 But as you look at the world of
short-term missions, there are so many different teams and ministries to choose
from.

Last month, our team in Mississippi
ran into a mission team from Chicago.
They were a group of transvestites.
Here’s a picture of them to the right.

I haven’t
figured out who they were with or what they were doing, or even what to say
about such a group. Hey, at least
they’re not watching the Rocky Horror Picture Show.

An easier mission team to comment
on was a friend’s church group that does a mission trip in Nicaragua. They stay in a nice hotel in Managua, won’t
allow their people to touch orphans for fear of getting a disease, and hire
armed guards to go with them. I mean, this
in the safest country in Central America – why even bother going?!

Although there is an organization whose purpose is to
advance excellence in short-term missions (called SOE), I’d like to see it have
the teeth to help police the multitude of teams that are taking shortcuts in
the way they do mission projects.