Shrewd as snakes & innocent as doves 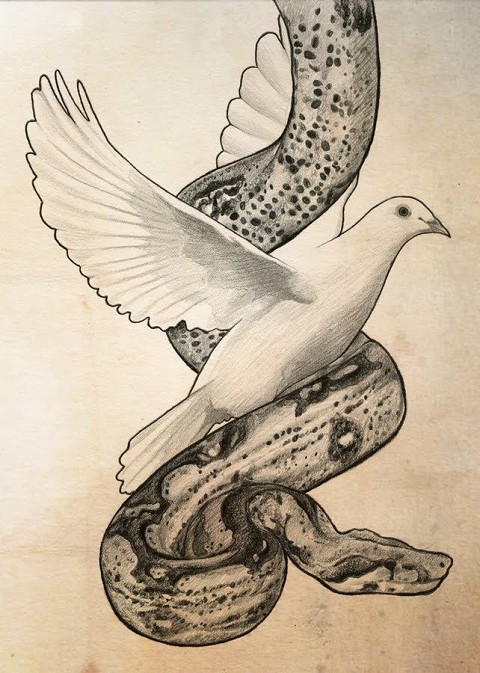 I don't know about you, but one of the things that I most struggle with as I try to follow Jesus is this tension between relying on my own God-given common sense and the life of faith.

By nature I'm practical. Frankly, a lot of Christians seem flaky and impractical to me. When faced with problems, they seem to overspiritualize things. How to balance this call to faith with life in the real world?

For example, there's this time when Jesus sends his disciples out on short-term missions and doesn't allow them to take anything. It seems incredibly impractical.  He asks them to leave behind all the things that can make a journey easier. Stuff that money can buy. He tells them be "as shrewd as snakes and innocent as doves." (Matt 10:16)

"Take nothing," he says. No food, purse, sandles or bag.

By stripping them of their stuff, he makes them as innocent as doves. They are stripped of anything but a complete reliance on their generous and loving heavenly Father. He wants to train them in how to depend on God.

But when do we ever see Jesus equipping his disciples to be shrewd? A shrewd person takes the measure of those standing in his way and figures out how to beat them. Pippen and Merry were innocents. Gandalf was shrewd. It's a paradox, on the one hand he's saying, "Don't prepare," and on other the hand he's saying, "prepare."

Why the switch? Peter had learned so much, and while he and the other disciples were still waking up to their identities as spiritual beings in the kingdom, they'd largely completed the task. And in light of that, Jesus is saying, "It's OK to be practical."

We see this emphasis on the practical later on as well. When talking to Thomas, he acknowledges this rational/critical side that many of us have. He gives Thomas the proof he needs to be able to exercise his faith.

The issue seems to be one of timing. We're born practical, our self-preserving instincts on full alert. We have to unlearn some habits if we're to depend on God. But God has also equipped us with common sense and Jesus wants us to use it as we seek to walk by faith. It's a tension to be managed.

Floyd McClung, a disciple of Jesus Christ and a hero to many, moved his residence to heaven a l…
07 December 2018

If Something Can’t Be Done Well, Should You Do It?

Anything I’ve learned to do in life, I began doing poorly. It’s the way we learn. Think about the…
11 April 2018

The Only Thing That Counts

What is important in life? The Bible has something to say about that:  “The only thing that…