Social networking is dumbing us down

Two new books sound the alarm bells for those of us who believe in the greatness of our young people.  The first is provocatively titled The Dumbest Generation: How the Digital Age Stupefies Young Americans and Jeopardizes Our Future.  Author Mark Bauerlein forecasts bad times …
By Seth Barnes
04 August 2008, 12:08 am
By Seth Barnes
04 August 2008, 12:08 am

Two new books sound the alarm bells for those of us who
believe in the greatness of our young people.
The first is provocatively titled The
Dumbest Generation: How the Digital Age Stupefies Young Americans and
Jeopardizes Our Future.  Author Mark
Bauerlein forecasts bad times ahead for America based on the fact that Facebook
and Myspace have displaced meaningful social interaction, replacing it with
shallow gossip.* 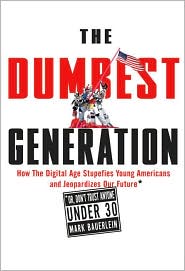 Bauerlein tracks a trend that is eroding many of the
values that have been foundation in our society:

For decades, concern has been
brewing about the dumbed-down popular culture available to young people and the
impact it has on their futures. At the dawn of the digital age, many believed
they saw a hopeful answer: The Internet, e-mail, blogs, and interactive and hyper-realistic
video games promised to yield a generation of sharper, more aware, and
intellectually sophisticated children.

But the enlightenment didn’t
happen. The technology that was supposed to make young adults more astute has
had the opposite effect. According to recent reports, most young people in the
United States do not read literature, visit museums, or vote. They cannot
explain basic scientific methods, recount basic American history, name their
local political representatives, or locate Iraq or Israel on a map.

“They don’t,” says Bauerlein, “grow up.” They are “living off the thrill of peer attention. Meanwhile, their intellects refuse the cultural and civic inheritance that has made us what we are now.”

OK, I’m a compulsive multi-tasker with 500+ friends on my Facebook account.  Where does this leave us?  Well, because our democracy is predicated on a foundation of common knowledge, it does not bode well for either our form of government or the perpetuation of our values.

Hoping to cast some light on this issue, I turn to a second book: Distracted: The Erosion of Attention and the Coming Dark Age, by Maggie Jackson, only to find her an even worse Cassandra.  What does Jackson foresee?  Only the demise of our civilization as we know it.  This is not a book to turn to for encouragement.

Whereas Bauerlein is diagnosing a societal trend, Jackson is concerned with documenting the psychological phenomenon of distraction and analyzing its impact on society.  One American study, for example, found that interruptions take up 2.1 hours of the average knowledge worker’s day. This, it was estimated, cost the US economy $588 billion a year.  Furthermore, evidence is showing that people in chronically distracted jobs are, in early middle age, appearing with the same symptoms of burn-out as air traffic controllers. They might have stress-related diseases, even irreversible brain damage.

The net effect of our scanning, multi-tasking way of living is that we are losing the ability to pay attention.  As one reviewer notes, “We are no longer engaging in such activities as reflection, searching for deeper meanings, taking time to relax and participate in traditionally intimate conversations, getting to know people in a personable way, taking the time to discern the really important from the merely transitory.”

OK enough of bad news – I apologize for being its bearer.  But look, we Jesus-followers mustn’t swim along with society’s current.  All good things lie upstream.  If you’re a young person, pay attention to the risks these authors document and consider cutting back on all the social networking you do.  If you’re a parent, recognize that you may have undervalued the discipline of going deep, whether in studying a subject or in relationships.

Generally speaking, we need to re-gain the ability to focus and empathize.  It’s the way out of the self-absorbed swamp into which many of us have wandered and are struggling to get out of.  Limit the sources of potential distraction in your life and block off chunks of time where you choose to go deep instead.

*90% of sites visited by teenagers are social networks.

For more on this
subject, read this
article.