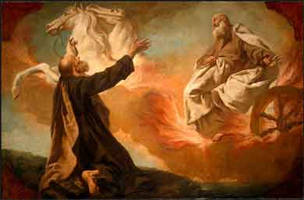 I like the story where the king of Israel asks Elisha
about the army attacking them. Elisha responds, “Don’t be afraid; those who
are with us are more than those who are with them.” (2 Kings 6:16-17)
What! What was he talking
about? No one was with them! They were about to be overwhelmed by a
vicious army. My knees would be knocking and I’d be praying the last rites over myself. But Elisha sees something and prays, “O God, open his eyes so he may see.”
Wow, what a great prayer. Something else was going on that the king just couldn’t see. There isn’t a day that goes by that I don’t need to be praying that prayer. “O God, open my eyes so I can see.”
Then the Lord opened the king’s eyes and he saw “the hills
full of horses and chariots of fire all around Elisha.” That was
reality, he just needed to have his eyes of faith opened. And, of course, we are
no different.
What impossible situation do you need to see through the
eyes of faith? As I often say, we are not human beings having a spiritual experience, we’re spiritual beings having a temporary human experience. The problem we have to confront is that we’ve been using our five senses and our rational mind so long that it’s hard to perceive the world through any other lens.
Our perception is askew if not broken. Unless we switch on our spirit inside and see through the eyes of faith, we’re doomed to go through life missing the spiritual big picture. And sadly, I think most of us do miss it.

Jesus had a heck of a time training his disciples to see this way. “Stop judging by mere appearances,” he admonished them.

Earlier, he had told them, “The Son can do nothing by himself. He can only do what he sees the Father doing,” (John 5:19). Jesus himself was limited to what he could see happening in the Spirit realm.
But the disciples struggled as we do. When Jesus tells them to feed the great crowd following them, Philip processes the situation through his rational mind and declares, “Eight months wages would not buy enough bread for each one to have a bite!” He needed to open his spiritual eyes and see what God was doing.
So again I ask, what problem are you seeing through your physical eyes? What army is surrounding you? Isn’t it time you acted like the son or daughter of the Most High God that you are and ask him what he is doing in that situation? We need to open our spiritual eyes and stop judging by mere appearances. Life is too short. Without the eyes of faith – that is, without our spiritual eyes open – Scripture tells us, it’s impossible to please God. (Heb. 11:6).