Student suspended for not denying Jesus

If you needed further evidence that Christians are under attack and religious tolerance is a joke, here it is. This story just appeared in the Christian Post: A Florida Atlantic University professor made his students write the name "Jesus" on a piece of paper and then trample on…
By Seth Barnes
24 March 2013, 12:03 am
By Seth Barnes
24 March 2013, 12:03 am 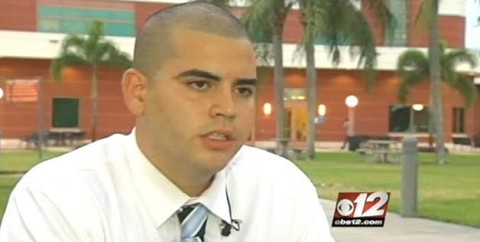 If you needed further evidence that Christians are under attack and religious tolerance is a joke, here it is. This story just appeared in the Christian Post:

A Florida Atlantic University professor made his students write the name "Jesus" on a piece of paper and then trample on it, as part of a "lesson in debating," a student suspended for refusing to participate in the exercise has revealed.

"I'm not going to be sitting in a class having my religious rights desecrated," student Ryan Rotela, a Mormon, told WPEC. "I truly see this as I'm being punished."

Rotela explained that his Intercultural Communications class was told to write Jesus' name on a piece of paper, then gather together and stamp on it. The student refused, however, and picked up the paper from the floor and put it back on the table.

The professor, Deandre Poole, was apparently trying to teach the students a "lesson in debate," but the student found the assignment to be insulting and offensive.

"I said to the professor, 'With all due respect to your authority as a professor, I do not believe what you told us to do was appropriate,'" Rotela said. 'I believe it was unprofessional and I was deeply offended by what you told me to do.'"

The student was suspended afterwards by the university, who is defending the instructor.

"As with any academic lesson, the exercise was meant to encourage students to view issues from many perspectives, in direct relation with the course objectives," Noemi Marin, the university's director of the school of communication and multimedia studies, told Fox News.

"While at times the topics discussed may be sensitive, a university environment is a venue for such dialogue and debate," Marin added.

Stamping on Jesus' name is actually an entire lesson which is included in the textbook for the class, called "Intercultural Communication: A Contextual Approach, 5th Edition."

Ironic that the university would say that "a university environment is a venue for such dialogue and debate," yet it would foreclose the possibility of debate by suspending the student. Shades of 1984 doublethink.

And it's interesting that Professor Poole, who is rated low by students on RateMyProfessor.com, is backed by the administration, while the student who pays for classes designed to help him be open-minded, is suspended. Where is the accountability in a state-funded institution?

So, my question is, how should those of us who are followers of Jesus respond? I, for one, will be writing FAU President Mary Jane Saunders asking for her response. Her email: [email protected]

What do the alumni of Florida Atlantic think of this? What do the taxpayers who support it think? What do you think?