Karen and are I traveling to Thailand today to meet our World Race squad.    We just flew the first leg to South Korea. When we checked in, we were overjoyed to hear that Korean Air assigned us a couple of middle seats, but we traded places with some people who wanted to sit together…
By Seth Barnes
11 November 2008, 12:11 am
By Seth Barnes
11 November 2008, 12:11 am 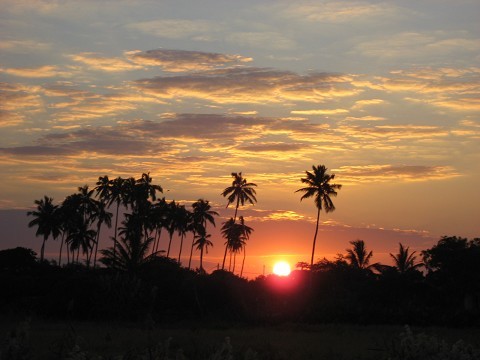 Karen and are I traveling to Thailand today to meet our World Race squad.
We just flew the first leg to South Korea. When we checked in, we were overjoyed to hear that Korean Air assigned us a couple of middle seats, but we traded places with some people who wanted to sit together.
Next it’s on to Bangkok, arriving around midnight (noon according to our body clocks). We’ll try to squeeze in some sleep before traveling with our racers three hours to the island of Koh Samet for a debrief.
Having a great destination makes the overseas flight more bearable.
What do those of you who fly internationally do to survive?  These long flights can occasionally be trips from hell if you run into delays or get a bad seat next to a crying baby.
Here’s what I do:
The main thing is where you sit.  Upgrades or even exit rows are hard to come by on long flights, so Karen and I go for a couple of seats together (or with an empty one in between us if we can swing it) next to a window.  She likes the aisle and uses one of those wrap-around pillows.  And on this last flight, she chose to sit next to a baby just to get a bulkhead seat.  As for me, If I’m going to try to sleep, I like to lean my head against the window.  This is the one occasion where I praise God for not being a tall person.
Airplane seats are kind of hard, so I like to sit on the little pillows they give you.  My doctor dad advises getting up frequently so you don’t develop blood clots in your legs.  And of course, you’re supposed to drink lots of water to keep from dehydrating.
Lately, most of the flights have got little TV sets built into the seat in front of you.   They offer a selection of movies and TV shows.  Having a comfortable headset is key.  I’m too cheap to splurge on Bose earphones, but those are awesome. Mostly we just go into zombie mode. I get tired of the movies.
Food on Korean Air is OK.  You can get some interesting kimchee kind of stuff and maybe a few pieces of dried seaweed to play with.
When you disembark at Inchon airport, if you’re a frequent flyer, they give you free passes to their first class lounge. That’s where we’re sitting now – catching up on email and eating stuff from their little buffet doesn’t smell like pickled cabbage. Karen likes to break up the long flights (14 hours so far and five more to go).
Occasionally there will be a screw-up with the party who is supposed to meet us upon arrival.  Once we were left waiting in Manila for two or three hours. Having a backup plan in advance is always a good idea.  Nothing like arriving, not having showered in a day, feeling slimy and then just sitting there with no idea what to do.
The hardest part about leaving is that we leave Leah and Whimsy behind in a quiet house.  Emily and Casey take care of things, but its hard leaving all the time.
OK, that’s my inventory.  Anybody have some other travel tips?