I met Kevin first by email. A few weeks later I happened to be speaking at a church in Chicago. En route, I got an email from him while sitting in the plane waiting to take off. “Where are you speaking?” He asked. And he and Christi and their delightful children were there to meet me at church – …
By Seth Barnes
21 May 2008, 12:05 am
By Seth Barnes
21 May 2008, 12:05 am

I met Kevin first by email. A few weeks later I happened to be speaking at a church in Chicago. En route, I got an email from him while sitting in the plane waiting to take off. “Where are you speaking?” He asked. And he and Christi and their delightful children were there to meet me at church – they needed my help in fulfilling their call. God was wrecking them and breaking their heart for Swaziland and they felt him saying, “I’m sending you there to care for my orphans.” They were doing the best they could to keep up with him. I began telling their story in yesterday’s blog. Here it is in their own words. And Kevin talks about it in the video at bottom. 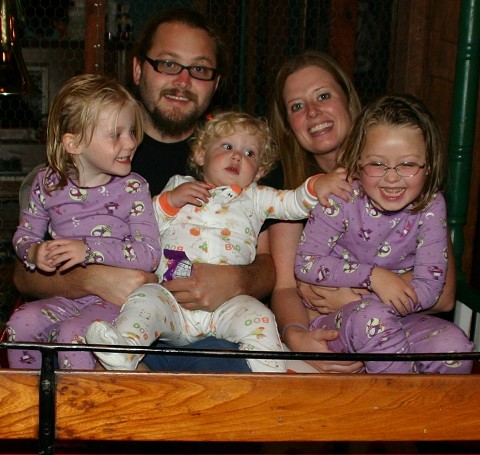 Kevin writes: It was a 100 degree day. The drive through the sugar fields was amazing and beautiful. Then as we left the paved roads and passed through the sugar fields to the land behind the facade, it was a dry parched land. Kriek told us as we were driving there it was the only truly God-forsaken place she had ever been. You thought she was exaggerating until you pulled up and saw it.

A mud hut they called the kitchen where the GoGos cooked for the 120 orphans at that care point. Water was over a mile away. No trees, just brambles and dirt. The “church,”, the only covering anywhere was a stick frame with a tarp draped over the top. A tarp is only temporary shelter, and its time was up, as it had developed holes and rips. Still better than nothing.

Christi writes: I really struggled with going to Africa. I didn’t want to leave the kids for that long. Kevin was really reaching towards spiritual things more and more. I liked what I saw, but I wasn’t ready for all that yet…I thought. Anyway, I knew that if I didn’t go on this trip with him to Africa, it would only make this spiritual gap between us bigger, so I decided to go. People said it would change my heart, but I didn’t believe them.

Sure enough, the first time we got to a care point, I came alive. This is it, “this is what I was made to do,” I thought. I held one of the younger kids, and immediately started crying. My heart just broke.

The third day, I was in Kreik’s car, and she talked about the carepoint we were going to that day. She said it is God-forsaken country. When we arrived at Big Bend I saw why. There was NO shelter from the sun, and it must have been 110 degrees outside. When we stepped outside of the car, we stepped onto the driest earth I have ever walked on. Everywhere you looked the land was parched and cracked and barren. Their were bur plants everywhere, and thorns easily 3 inches long. I got burs in my shoes. Once they got in there it was impossible to walk. You couldn’t get away from them. As you stopped to pick the burs out, more would get into the shoe you were balancing on. My husband had a 3 inch thorn go right through his shoe, and up into his foot. There was pain and ugliness everywhere you looked and stepped. You got the feeling that the very earth you stood on had been cursed by God. I wondered why.

As we approached the kids, one little girl in the crowd stood out to me immediately. She stared right at me…right into my eyes. I had to look away to break the stare. She was unlike the other kids I had seen and played with. She didn’t run and jump in my arms. She didn’t ask to be held. She just looked at me. I felt something inside me say “go get that little girl”. But then something else said “no don’t”. We had been told by other people, that some of the kids are afraid of white people, so I believed that I was doing the right thing by distancing myself from her. I wasn’t. 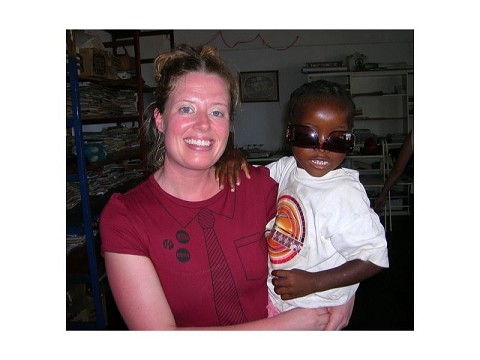 About an hour later, Jumbo showed up with some water, and Kreik mixed some drink mix in with it. We helped line the kids up to get their drinks. I noticed the little girl again. She had gotten her drink, and was aimlessly, almost deliriously, walking through the crowd. She had no one to go to it seemed like, but it looked like she needed a place to rest. So I picked her up and sat her on my lap. It was then that I felt how feverish she was, and the walking around delirious, made sense. She didn’t feel good. It was the middle of their summer, and she had this nagging cough. She was also sneezing a lot, and there was green stuff caked around her nose.

Purplish OPEN sores COVERED her body, and fluid was oozing out of most of them. Bugs were on the sores, and flies were swarming around her. The meal at the care point had been served, and all the kids were eating. She was on my lap so she hadn’t gotten her bowl of food. These kids walk MILES a day for one meal, so I didn’t want her to miss it. I pointed to someone else’s bowl, and asked her if she wanted a bowl. She shook her head no, and laid it on my chest. My motherly instincts kicked in, and I began asking around to see where this little girl’s mother was, so that maybe her mother could make sure she ate something. The adults told me she didn’t have a mother. It was safe to assume that she has no father either…so she was completely orphaned.

She had to walk there; it must have been hard for her, given the condition she was in. And then once she was there, she was forced to walk around deliriously in her feverish condition, as there was no shade, no shelter, no adult to rest on. It was then that I began to regret not picking her up when I first arrived in this God-forsaken place. She could have had another hour to just rest.

As I held her, with her head on my chest, tears came flooding down my face. I turned away from her, because I didn’t want her to see them. I couldn’t help but think of my own children at home. When they are sick, they become a prince or a princess for the day or for how ever long they need to be. I put them on the couch, and I prop a pillow or two up, just right, behind their sick head, and I cover their bodies with a warm blanket. They get a bell, or a noise maker that they can ring to get my attention whenever they want it.

I send my husband to the store to get sprite, and whatever else I feel might be good for them, and their condition.. I cried because their was no one to do that for this little girl. I wanted to, but the sad reality was I was going to be taken back, in an air conditioned vehicle, to one of the nicest hotels in Swaziland. I was going to get a hot shower, and be taken to a nice restaurant for a hot meal. After I was done with my hot meal, I had the option of swimming in a nice pool, and I had a comfortable bed to get a good nights sleep in.

I have never been more ashamed of how I take my blessings for granted. At that moment, I could have given all that up to stay there with her. I didn’t have that choice though. As they called me to the car, I had to give her up, I had to let her go, and again she just stared at me…she stared into my very soul, and all I could do was kiss her and tell her I was so sorry. I was sorry for a lot of things. I was sorry I hadn’t listened to God’s spirit in me telling me to pick her up earlier. I was sorry I had wealth, and she didn’t. I was sorry she had to continue living in God forsaken country, while I got to return home to America. I was just sorry.