Taking the old self to a new place

If you are in a place where the comforts of home have dumbed down your spirit, you need a kingdom journey. But recognize that a journey by itself won’t change you. For that to happen, we need God to guide us out and eventually, to take us to a place of emptying and brokenness.   Ear…
By Seth Barnes
20 April 2011, 12:04 am
By Seth Barnes
20 April 2011, 12:04 am 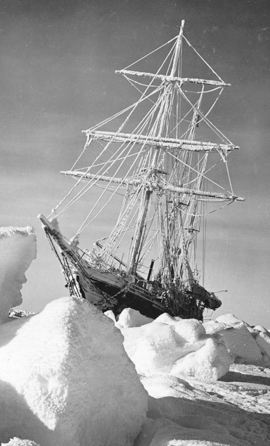 If you are in a place where the comforts of home have dumbed down your spirit, you need a kingdom journey. But recognize that a journey by itself won’t change you. For that to happen, we need God to guide us out and eventually, to take us to a place of emptying and brokenness.
Earnest Shackleton wrestled with the curse of restlessness (see yesterday’s post). But his trips to explore the South Pole didn’t cure it. In
1917, he volunteered for the English army and fought in World War I. He
returned home in 1918 after suffering what was probably a heart attack,
having seen no combat.
Once a vehement enemy of all drinking, he became
an alcoholic.  In 1920, he began planning another expedition, this time
to circle Antarctica and map the continent, and a year later, he set
off.  He did not live long enough to see England again, dying of a heart attack near Buenos
Aires.

Despite his heroism at sea, he left his family in shambles.  His family inherited his ₤40,000 debt, ($2.3
million in today’s dollars).  Rarely at home, he could hardly have been called a
good father.  A charity fund had to be established after his death to
pay for the education of his children. Today, his character is held as
an example to US Navy officers of how to handle disaster in an
emotionally controlled manner.  Yet, his personal life was a mess.

Transformation is not automatic, and if one day, without a call, without
following God, you just leave and go on a journey, you might be
disappointed when you get back and fall into the same patterns.
Shackleton thought he would find freedom on the sea, but he only found
alcoholism, loneliness, and death.
Richard Rohr calls this the
“geographical solution,” and says, “We forget we take the old self to
the new place.”  Our physical journeys do not change us by themselves.
We can only have freedom if we allow ourselves to be changed.  We have
to embrace the pain of emptying before we can be filled.  The journey
won’t do that for us by itself.

But, of course, neither will praying, fasting, meditating, and all the
other spiritual disciplines.  Just look at some of the very religious
Muslims, Hindus and Christians who live violent and bitter lives.  A kingdom journey gets you on the road to change, but by itself is not enough.

If you are feeling called to a kingdom journey, embrace it.  Prepare
yourself to respond with gratefulness to the pain you encounter along the way.  Get ready to learn
to find some kind of satisfaction in the emptying process.  Practice the
secret of being content in whatever circumstance, whether poor or
rich.  And if you’re on a kingdom journey right now, lean into the
discomfort.  It will set you free.