When our children were growing up, especially during their adolescence, Karen and i sensed that we needed help. Things were actually going well for us as parents. None of our five kids faced a crisis; we actually like each other; so why look for issues?   Having worked with young people fo…
By Seth Barnes
30 November 2010, 12:11 am
By Seth Barnes
30 November 2010, 12:11 am 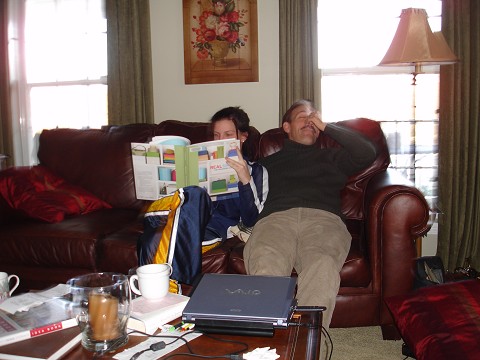 When our children were growing up, especially during their adolescence, Karen and i sensed that we needed help. Things were actually going well for us as parents. None of our five kids faced a crisis; we actually like each other; so why look for issues?
Having worked with young people for years, we sensed that our kids were going to need more than we could offer in the years ahead. They were going to need a safe place to talk about issues that might seem uncomfortable to discuss with a parent. They were going to need to begin forming their own opinions and to begin navigating the world on their own. And they were going to need encouragement and challenge from someone other than us.
So we looked around for friends who could meet with them, listen to them, and begin mentoring them. For example, Estie met with our friend Amie Bokelman. Amie was already a family friend that Estie trusted, but when she began getting together regularly with Estie, she started to dive into Estie’s life. I don’t know what they talked about all those times that they had coffee and talked, but now that Estie is 24, we’ve got a little perspective on the fruit it bore and we’re so thankful for Amie’s investment.
The world is a complicated place. So many friends of ours have felt helpless as the sweet little children they’d protected entered adolescence and soon thereafter began to struggle with titanic issues for which they were unprepared – stuff like alcoholism, depression and pregnancy.
I was talking with a friend whose daughter is on the front side of that chaotic phase of life. He said, “I wish that one of your daughters would meet with my daughter.” As we talked about it, we realized that while almost all adolescents would really benefit from having a mentor or a discipler, few actually seek one. We threw around some ideas as to why.
Some suggestions
If you’re a teenager – reach out. You would really benefit from guidance. Find someone who is not afraid to say hard things and ask them to talk to you about a specific issue over coffee. If it goes well, then ask them to meet with you again.
Other thoughts: